BROADWAY MARCH ON MAY 1ST BY OCCUPY WALL STREET – VIDEO

On May 1st the Occupy Wall Street Movement took over New York City with a series of marches and protests.  Starting out in “pop-up encampment” Bryant Park in the morning, over the course of the day, their “99 Pickets” campaign had spread to numerous locations throughout the city, including a mass protest that marched downtown on Broadway.  The movement against greed and corporate corruption emerged 8 months ago and is still gaining momentum throughout The Untitled States, despite the lack of their Zuccotti Park headquarters in Manhattan. Since being ousted from the location the movement has struggled to maintain media attention.  The permitted protest down Broadway was so peaceful, it appeared to be more of a parade than a social protest. Protests also took place in other cities throughout the US, most notably in San Francisco and Chicago. For more information about the global movement, also visit the Occupy Together website. 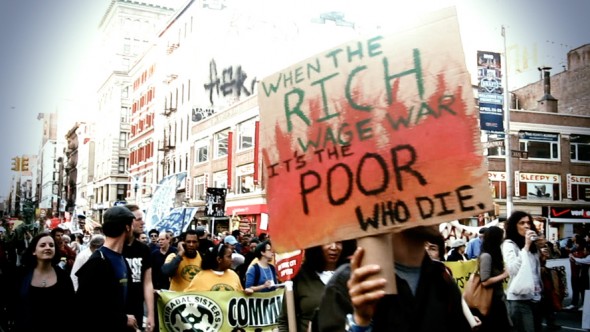