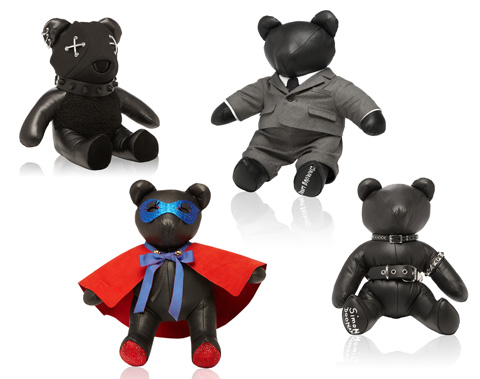 The Other Ball, a brand new annual charity event to raise funds to protect children from adversity and exploitation in the developing world, will be taking place tonight, December 10th, at The Highline Ballroom in New York City. TOPSHOP + TOPMAN will be the official headline sponsors of this year’s event, bringing British producer and artist Mark Ronson to host the evening. The Other Ball intends to bring together kindred souls to lift spirits and honor the power of music to create global social change. The Black Keys will perform and Jeff Bhasker will act as musical director for A$AP Rocky, Mikky Ekko, Lykke Li and Miguel.

“When Mark [Ronson] approached us about ‘The Other Ball’ and told us the incredible story of Arms Around the Child and Leigh Blake and her team’s work to make positive change in the lives of helpless and exposed children across the world, there was no question regarding our support,” says TOPSHOP TOPMAN. “This event will bring creative hearts and minds together in one of this year’s most exciting events and will no doubt raise awareness and much-needed funds to enable Leigh and her team to continue their invaluable work for these extremely vulnerable young people.”

“I’m deeply honored to be involved in the first annual event for Arms Around the Child, The Other Ball. Leigh is a force of nature and through her tireless work and insane energy, has launched the two life-changing organizations, Red Hot and Keep A Child Alive, which have between them raised $50 million and helped to save over three million lives,” says Mark Ronson. “Leigh puts on some of the most memorable events. The Black Ball, the annul fundraising event for Keep a Child Alive, has featured mini concerts with everyone from Adele to Jay Z. The Other Ball is going to be its cool little sibling.”

Along with great music, the event will feature an auction of one-of-a-kind teddy bears designed by the likes of Christian Louboutin, Alexnder Wang, Topshop’s Topman, Opening Ceremony, Thom Browne, Simon Doonan, and Chromat. Each bear is crafted from black leather and has it’s own signature look. Louboutin, for example, created a superhero-style bear, donned with a cape and paws made with his signature hue of red. Each bear will have a starting price of $1,000, and if you can’t make it to the Ball, online and telephone bids will be accepted until noon on Tuesday. For information on bidding and tickets, click here.

THE LIFE AND DEATH OF MARINA ABRAMOVIĆ @ PARK AVENUE ARMORY