MADE IN MEXICO: THE REBOZO IN ART, CULTURE, AND FASHION

Throughout its history, the rebozo has been appropriated by revolutionaries, artists, writers and collectors who have helped to shape the garment into a symbol of Mexican culture and identity. In Castilian, the word rebozo suggests the act of covering or protecting yourself. It is referred to in literature of the 16th century: in 1555 by the grammarian Alonso Molina and in 1572 by the Fraile Diego Durán. The most famous proponent was artist Frida Kahlo (1907–54) whose embracing of traditional costume was a political statement of solidarity with the labourers of her country. Still woven using traditional techniques, the rebozo remains an important emblem of contemporary Mexican life and it is celebrated for the indigenous craft skills involved in its production.

The origins of the rebozo lie in the early colonial period of Mexico, which influenced the artisans of the country to emulate the highly prized embroidered shawls and mantillas of the Spanish. This shawl became a central element of the China Poblana, the traditional women’s outfit of Mexico. The rebozo has since become an integral part of daily life and represents the journey from birth to death, being used as both a baby carrier as well as a shroud. Most Mexican women today own at least one rebozo.

The exhibition is presented in sections which explore: the history of Mexican textiles; key personalities associated with the rebozo – from Frida Kahlo to Grammy award-winning musician Lila Downs; how the rebozo is used and worn; weaving techniques; and, the rebozo in contemporary art and fashion.

Historic rebozos from the Franz Mayer Museum, Mexico City will be reunited with an important loan from the British Museum, originally part of the Robert Everts Collection. Everts (1875–1942), a diplomat in Mexico at the turn of the 20th century, was one of the first people to identify the importance of the rebozo in Mexican art and design. Also featured is a selection of rebozos once owned by Ruth D. Lechuga (1920–2004), whose collection of Mexican popular arts is travelling to the UK for the first time.

Frida Kahlo’s key role in promoting the rebozo through her portraiture and beliefs is explored in a section of Mexican dress curated by renowned Mexican anthropologist Marta Turok. A parallel is drawn with 21st century musician Lila Downs, who promotes Mexican textiles through her art and performance in the same way.

Photographs by contemporary artists Graciela Iturbide, Antonio Turok and Lourdes Almeida document the rebozo in the context of Mexican life, art and fashion. While an installation by artist Mauricio Cervantes explores the ‘aroma de luto’ rebozo and its use as a death shroud.

The exhibition also explores the current resurgence of craft skills through a cultural exchange programme to design rebozos for the 21st century with University of the Arts London and Universidad Iberoamericana.

Head of the Fashion and Textile Museum, Celia Joicey says,

‘This important exhibition powerfully demonstrates the vibrancy of textiles in historic and contemporary Mexico. We are delighted to be showing the work of leading Mexican artists, designers and museums, in the only UK building designed by Mexican architect Ricardo Legorreta.’

‘The rebozo is a crucial symbol of Mexican life and identity. We are happy to be collaborating with the UK to highlight the beauty of Mexican textiles and to inspire future generations with their skilled craftsmanship.’ 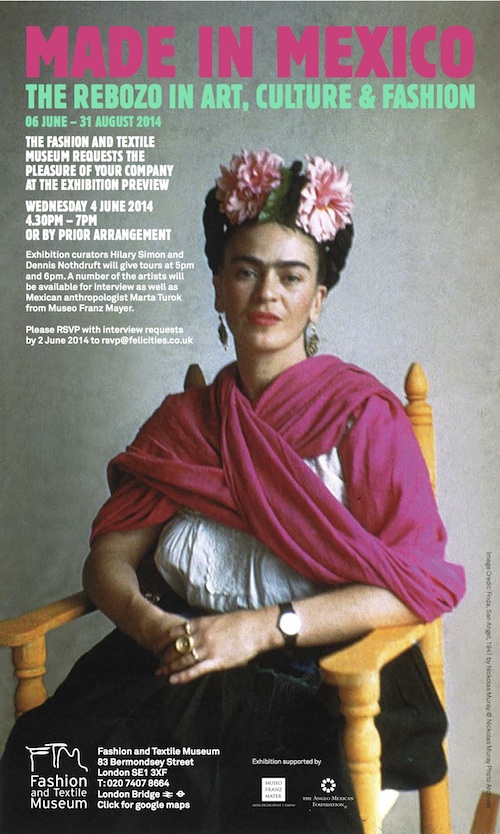