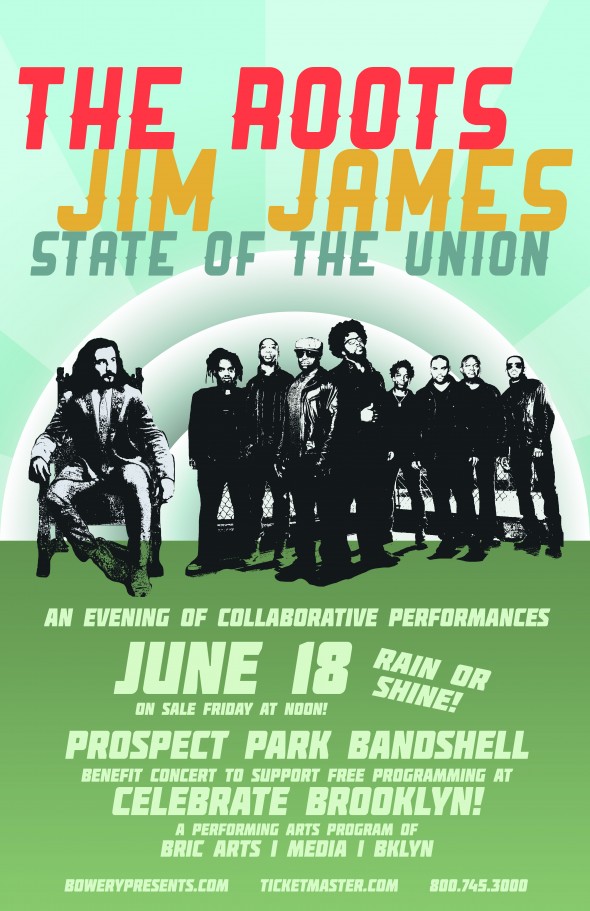 Over the last few months Jim James has manifested many multi-dimensional, highly revered live performances, including an appearance on Late Night With Jimmy Fallon, a SXSW showcase at Willie Nelson’s ranch and a duet with Wayne Coyne of The Flaming Lips. This week James embarks on a new North American tour starting in his hometown of Louisville, Kentucky on the night of Wednesday, April 17th.

In addition to these tour dates, we are thrilled to announce that James and his full band will be collaborating with The Roots in a one-time “State of the Union” performance at this year’s Celebrate Brooklyn festivities at the Prospect Park Bandshell on June 19th.

Pre-sale tickets for this rare collaboration will be available first come first serve to current members of My Morning Jacket’s Roll Call Fan Club and standard tickets for this one-of-a-kind performance go on sale Wednesday, April 16th at 10AM.

James’ existential space pop album Regions of Light and Sound of God is available NOW, and in celebration of Record Store Day James will be appearing at Exclusive Company record store in Milwaukee on April 18th.

“Regions of Light…is a record of deceptive weight; its attraction unfolds over repeated exposure, as the pop and vintage soul hooks hovering in the electronics and James’ pleading falsetto creep to the front-and-center. Live, that happened right away, with an uplifting emphasis on the hip-hop urgency embedded [in them].” – Rolling Stone

“A little gritty and a lot of funky” – The Fader

“James has grown more adventurous with each subsequent project” – Billboard