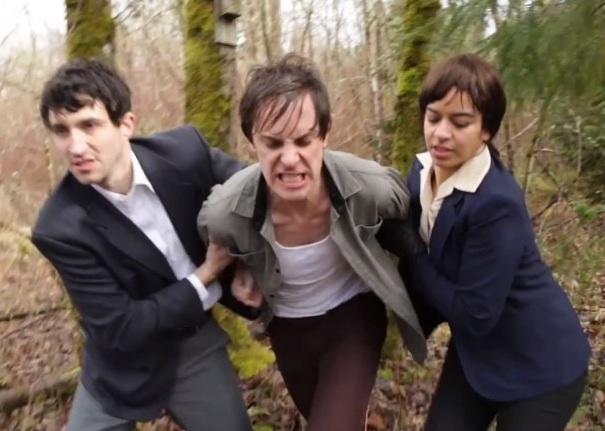 On Thursday, the video was premiered for The Thermals’ new single “Born To Kill” from the forthcoming album, Desperate Ground. The video is a dark, brash, and unapologetically violent two minutes of film. Shot in undisclosed locations in and outside Portland OR, “Born To Kill” is the short story of a killer getting his due – in the bloodiest of ways. Co-directed by Portland filmmaker Jeffrey Rowles and The Thermals themselves, this video is NSFW, unless you work for the CIA.

The Thermals are a post-pop-punk trio from pre-Portlandia-Portland, Oregon. The band formed in 2002 and has since released five records and toured fifteen countries. The Thermals’ sixth LP and debut for Saddle Creek, Desperate Ground will be released April 16. The album was produced by John Agnello (Dinosaur Jr, Sonic Youth) in Hoboken, NJ. Agnello and The Thermals completed the record and evacuated the studio just hours before Hurricane Sandy ravaged New Jersey, a fate quite fitting when you consider the product. Desperate Ground is a true scrappy and scratchy return-to-form for The Thermals, with all the raw power and unhinged adolescent energy that made their early LP’s so insanely enjoyable. Lyrically, Desperate Ground is a brash and irresponsible ode to human violence, a black celebration of the inevitability of war and death. A dark and yet joyous affair, Desperate Ground tells the (murky) tale of a lone rogue in the night. One man, one path, one sword. An unceasing urge to destroy. A never-ending battle against the forces of nature. A destiny impossible to avoid.

The Thermals just completed a successful run at this year’s SXSW Music festival. Billboard said, “Any sign that this ten-year-plus indie institution is ready to slow down was nowhere to be seen at a sweaty, energetic show at Spin’s day party at SXSW” while The AV Club added that Thermals, “totally killed it in the baking sun.” The Thermals just announced a tour in support of Desperate Ground. Look for additional shows to be announced in the coming weeks.