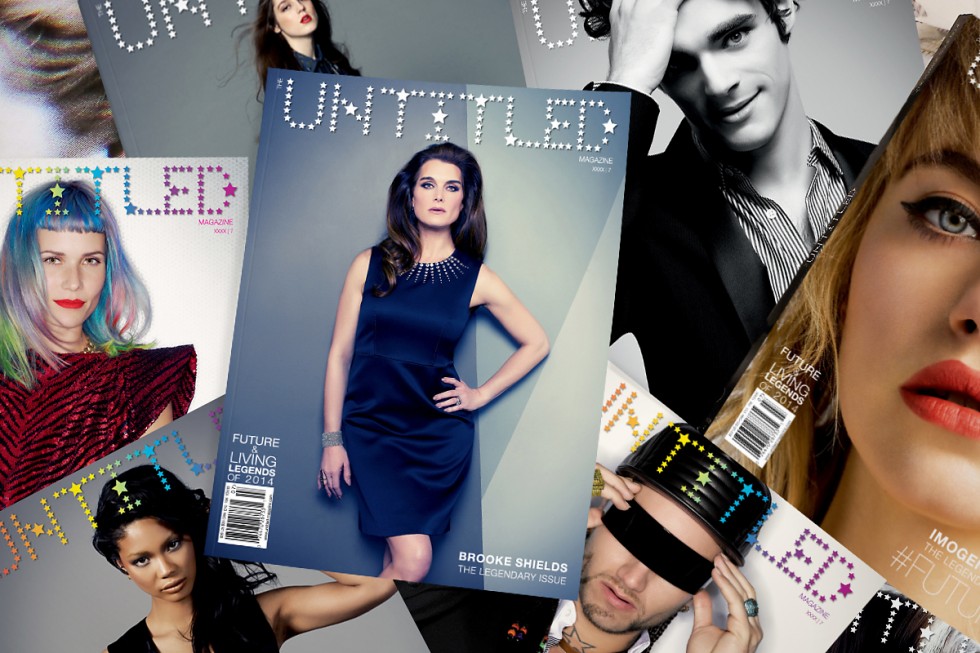 The “Legendary” Issue 7 of The Untitled Magazine is now available in over 30 countries, with a release on May 7th in the UK and May 30th in the United States. The special collector’s edition presents a cross-over of the most inspirational talent in music, film and fashion – featuring “Living Legends” and “Future Legends” of 2014. The 240-page print edition features the legendary Brooke Shields on the cover, as well as additional limited edition front & back covers of Boy George, Chanel Iman, Tiesto, Brooke Candy, Imogen Poots, Oh Land, RJ Mitte, Birdy, Riff Raff, Sophie Kennedy Clark and John Newman.

The “Legendary” Issue 7 takes a look at the “legends” that have shaped our perception of reality, and that define our everyday lives. From the music we listen to, to the clothing we wear, to films we love – our identities are impacted by a handful of people that manage to creatively influence the world over. The issue features in-depth interviews and stunning original photography of some of the most recognizable talent of our time – from Lauren Hutton to Blondie, Boy George to Brooke Shields. We caught up with Factory superstar Jane Forth to get an insider point of view of Andy Warhol’s world, as well as feature the legendary designer Vivienne Westwood and underground fashion hero Pam Hogg. Bush frontman Gavin Rossdale opens up about his plans for a new album, and actor Michael K Williams talks about his latest film roles. DJ Tiesto talked to us about his inspirational fundraising projects, and the master of the Q & A, George Wayne, sat down for an intimate tête-à-tête with stylist extraordinaire Phillip Bloch, who has joined The Untitled Magazine as Style Director from this issue.

Who are the legends of tomorrow? Our “Future Legends” section presents our predictions of the most promising talent of the new generation across fashion, film and music. These emerging artists all had something exceptional, challenging the norm with their unique qualities and represent the new wave of influencers. The Untitled Magazine presents over 50 exclusive photo shoots and interviews with these rising stars including Conor Maynard, Becky G, Sam Smith, RJ Mitte, Imogen Poots, Taryn Manning, Pia Mia, Sasha Pietrese, Zoey Deutch and many more.

Looking back and looking forward, this issue celebrates the people who make our lives interesting, enrich us and inspire us with new ideas and new directions. Who has defined our history and who will define our future? Look out for The Untitled Magazine’s “Legendary” Issue 7 on newsstands in over 30 countries, including fine retailers such as Barnes & Noble, Colette, Harvey Nichols and Selfridges. In addition to the 240-page print edition, the app and digital editions will include an additional 100 pages of editorial, with additional photos, behind-the-scenes videos and more – elevating the magazine experience to an entirely new level.

Order your copy now at The Untitled Magazine‘s online store, or find it at one of our retailers.