Fall is just around the corner and designers have released their campaigns shot by legendary photographers such as David Sims, Steven Meisel and Inez & Vinoodh, as well as a few newcomers. Here is a list of our favorite campaigns displaying Fall / Winter 2013 collections.

Marc Jacobs developed a collection reminiscent of the 1930’s with menswear inspired coats, lacy negligees,  and luxury accessories for this fall. The campaign is visually stunning and a bit haunting; presenting women of a bygone era with thought-provoking sensuality. Steven Meisel captured top models Gisele Bundchen, Isabeli Fontana, Carolyn Murphy, and Karen Elson in an awe alluring scene that makes us want to go back in time and live in that moment. Its cinematic feel gives the look of a retro movie with a memorable cast. The sets capture Marc Jacob’s vision of “hotel life” effectively. The boudoir feel of the image of women lounging in the bedroom in slips & furs shows a languid sensuality juxtaposed the more sterile visual of women on a train to their destination – which still remains romantic and aspirational. 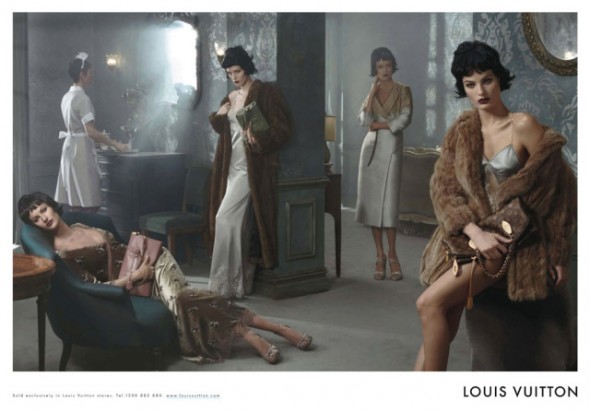 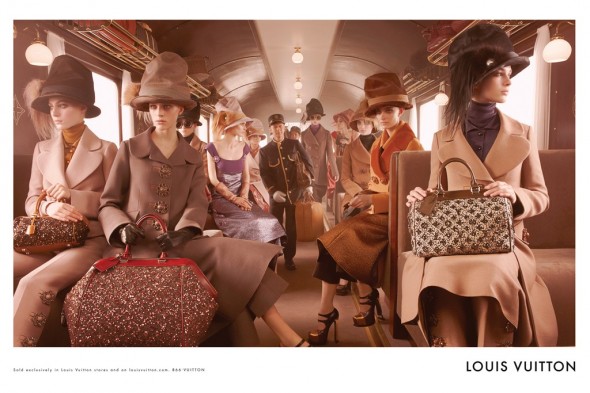 Lazaro Hernandez and Jack McCollough created a mature collection with silhouettes similar of the 1950’s with a lot of soft colors and textures. They constructed smooth forms mixing avant-garde and vintage shapes. Surreal and romantic, this campaign is a clash of vivid and hallucinogenic imagery. David Sims puts Sasha in a digital dream focusing on light and movement, which compliments the soft shoulders and draped feel of the collection. And like the rest of his work, the hair had a mind of its own. 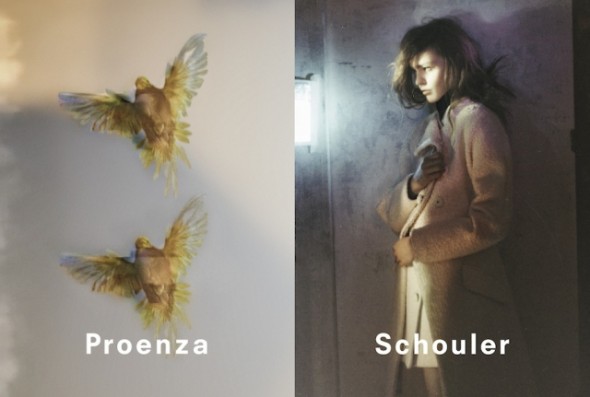 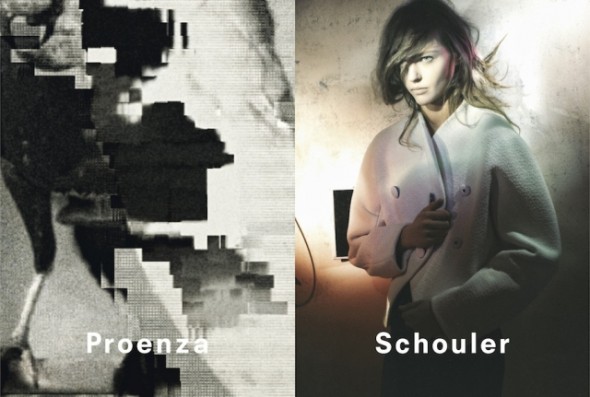 Designer Anna Molinari swept us away with a “Hollywood” feel with her streamlined shapes and bold floral print. She focused on bold colors and a tough feminine persona that translated through the clothes. There was also an eighties appeal to the collection which wasn’t overly emphasized in the campaign. The compelling imagery is a signature of Camilla Akrans’ photography. She captures Candice winning us over with her alluring stance full of romance and secrets. The model, clothes, and setting flowed together harmoniously, and without a doubt seductively! 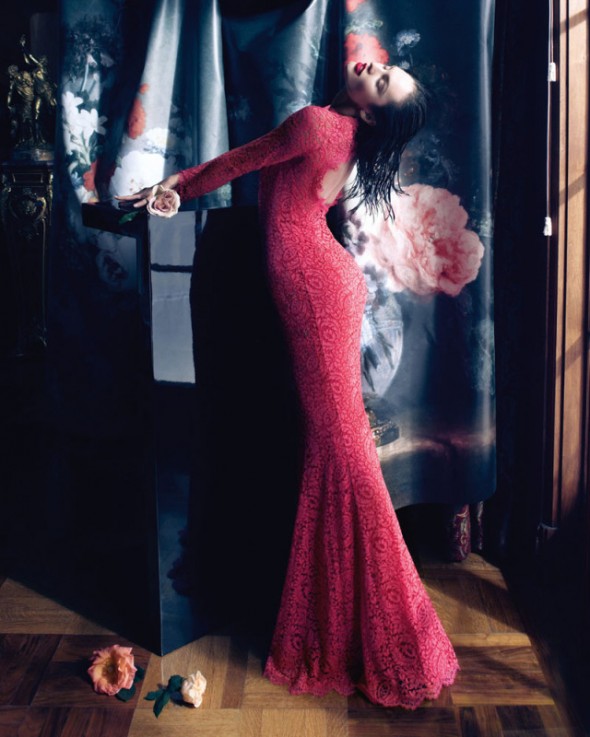 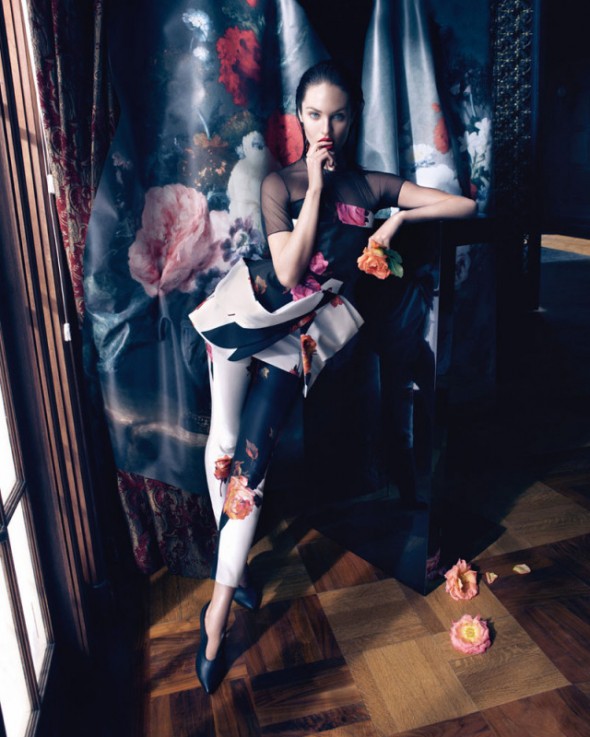 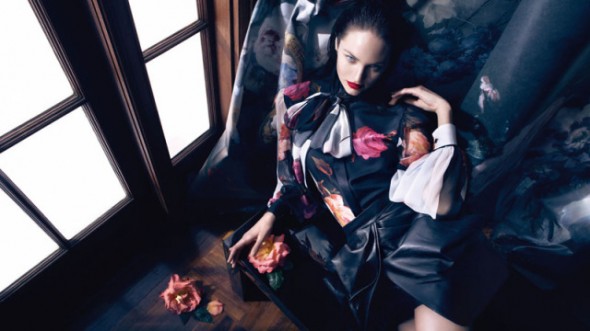 Missoni created a collection that was casual and cozy resembling pajamas with a sixties undertone.  The clothes were slouchy and carefree resembling luxury robes with a splash of orange, blue, and lime. Alasdair McLellan keeps it conceptual and modern fusing nature and geometric designs that reflect the collection’s sense of ease.  Like most of his work, it remains unconventional and whimsical with the setting giving it a modern twist. 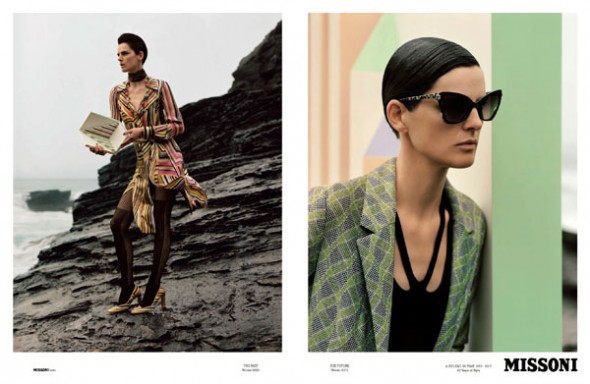 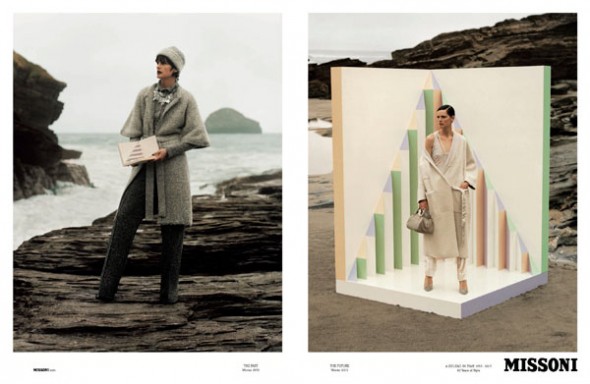 Domenico Dolce and Stefano Gabbana’s collection was inspired by the Catholic Church with a risqué feel. They created heavily embellished garments inspired by Venetian and Byzantine mosaics of the twelfth-century. The vibrant colors and animated expressions in the campaign exuded scandal yet there was still a sense of modesty with A-line dresses and  long hemlines. Domenico Dolce presented Bianca Balti, Monica Bellucci, Katie King, and Andrea as beautiful religious figures. Like the collection the campaign created a moment of fantasy and highly emphasized beauty. 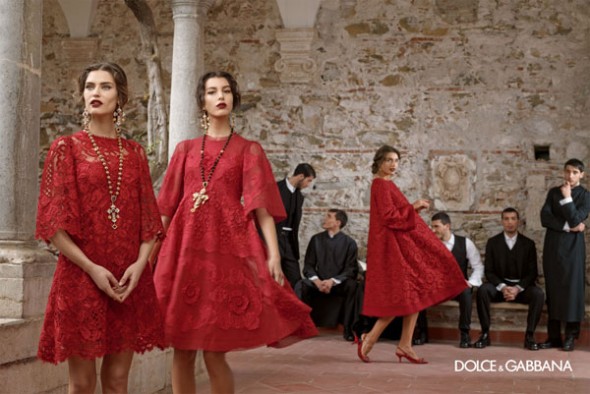 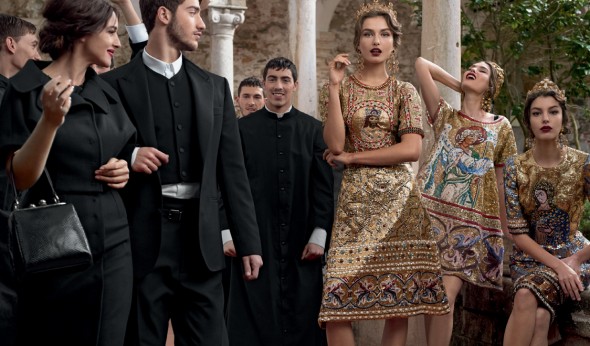 Miu Miu’s collection focused heavily on color and proportion with a mid-century vibe. It was clear that Miuccia Prada’s muse was Olive Oyl from the classic cartoon, “Popeye”. The collection stayed consistent with the elongated silhouettes and lady-like garments. The sailor details and pop patterns made sense for the creative duo, Inez and Vinoodh, to create a boat setting to complete this French style voyage. The mixture of playful stripes and polkadots gave this dark muted campaign a moody cartoon appeal, keeping it classic yet fun. 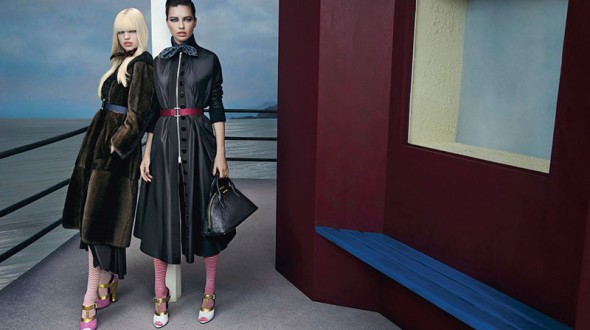 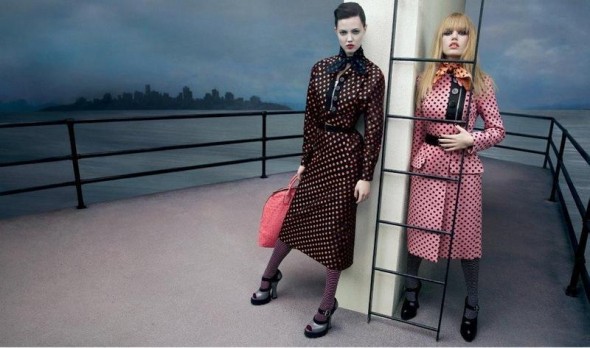 Dior’s collection was nothing but iconic with dramatic silhouettes and diagonal hemlines. Raf Simons created a collection that was surreal and pop with a references to the twenties. He added a graphic element with the asymmetrical hems that still held its softness. For this campaign, Willy Vanderperre went in a different direction by emphasizing the grandness of Dior’s aesthetic in a spectacular way by putting a “show within a show” at the opera. He staged Marie Piovesan, Iselin Steiro, and Daria Strokous that boasted the elegance of the gowns with the dramatic lighting making it cinematic and thought provoking. 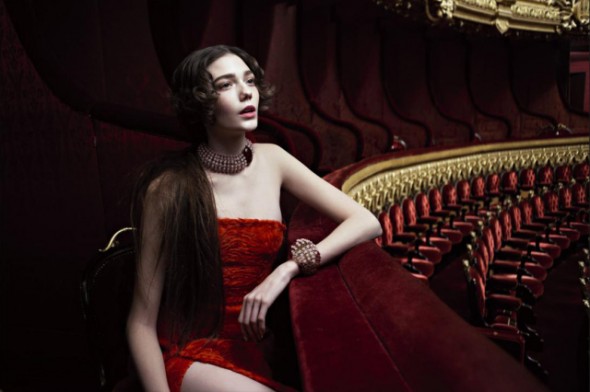 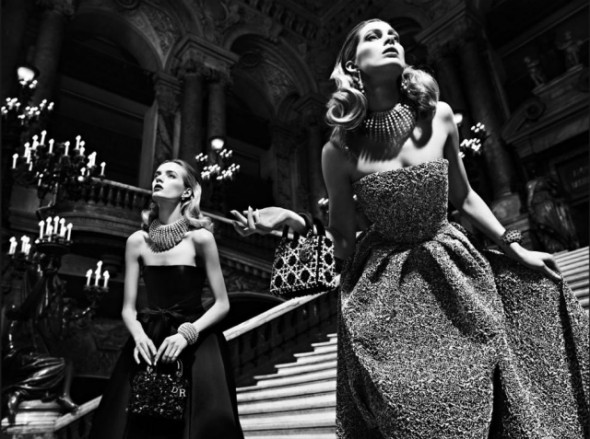 Miuccia Prada’s collection was a recollection of emotions unraveling that was translated through the twisted and turned garments. She wanted to convey a collection that focused on mood rather than just clothing. She successfully did that with the eclectic mix of fur, textures, patterns and dark palettes constructed in the traditional Prada way. Steven Meisel made the models look like they have emerged out of an autumn swamp blossoming into seductresses with their wet untamed hair and alluring stares that perfected the Prada’s vision. 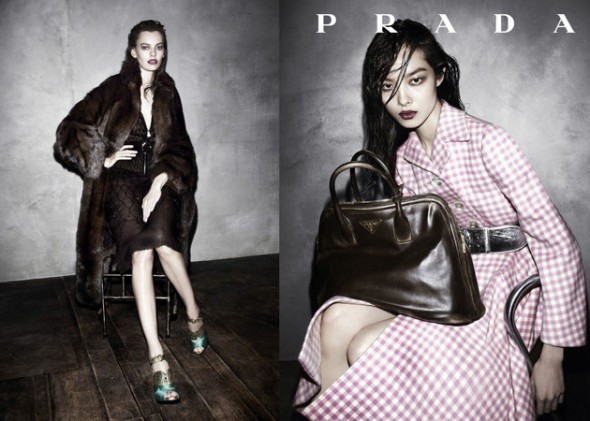 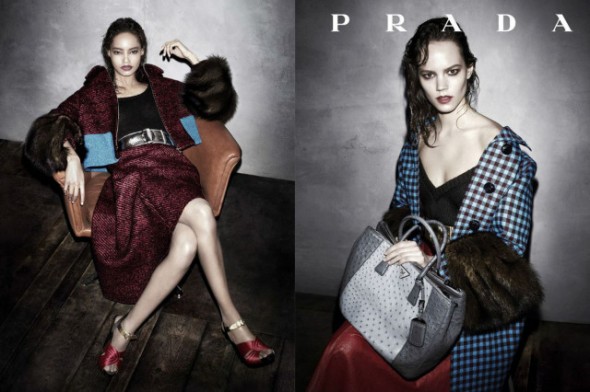 Hedi Slimane stuck to the usual menswear inspired tailoring with a touch of California grunge style. His muse was punk rock legend Courtney Love who made grungy look sexy. The collection consisted of oversized cardigans, short slips, and lean tuxedos fit for a rocker chick. It was all about the attitude and Slimane took that attitude and brought it into the campaign. The juxtaposition of the linear structures next to “it girl” Freja reminds us what Saint Laurent represented, effortless chic. The black and white campaign allowed “sloppy” to be hip and cool. 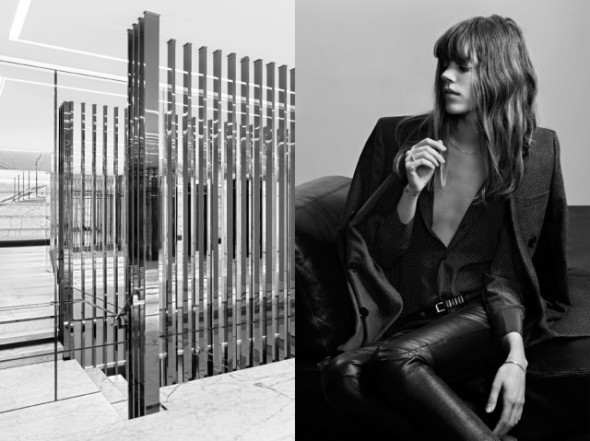 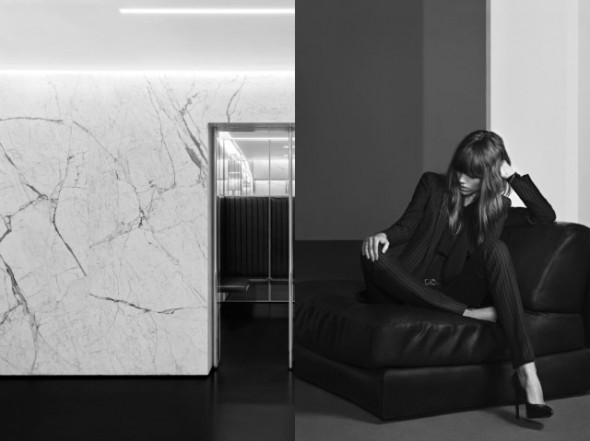 Phillip Lim looked towards the racer culture for his fall collection. Custom made patches and motorcycle jacket detailing made this collection direct and very wearable. It was a clash of Italian biker flair and Japanese motocross with the colors and fabrics. This campaign was a blend of rockabilly and punk rock on a wild ride that made the clothing look cool and easy. But Sou Lai portrayed Phillip Lim’s concept by giving it a racer feel through the collage of images and movement of the models. His photography was abstract and art driven making it a match for Phillip Lim’s collection. 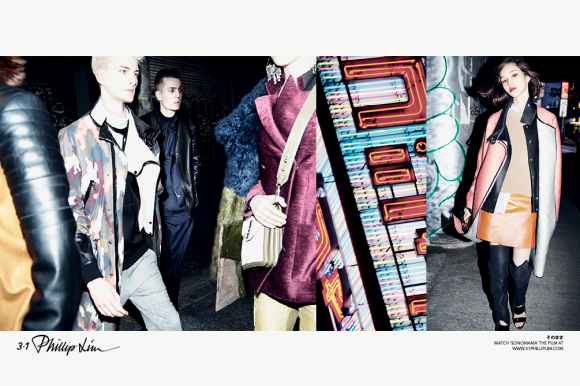 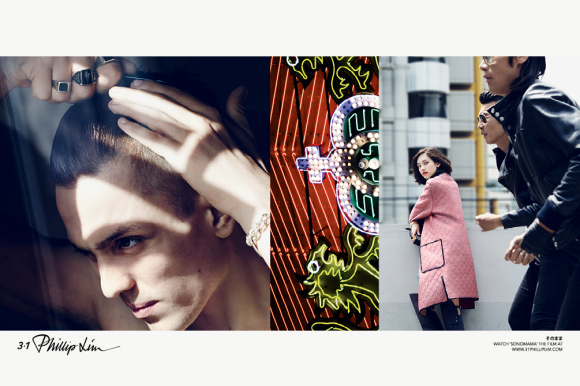