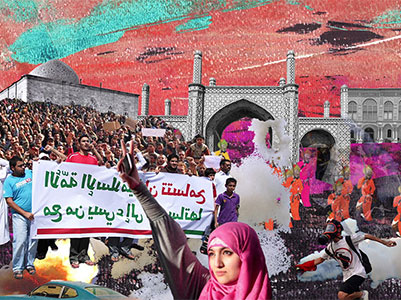 The Watermill Center presents an open rehearsal by Brooklyn-based performance, video, and installation artist Amy Khoshbin on October 17th at 7:30 PM. Khoshbin is an Artist-in-Residence at The Watermill Center during the month of October. For the work-in-process showing, Khoshbin will present a 60-minute scene from her ongoing performance and video series The Myth of Layla (TMOL).

TMOL is co-directed by Khoshbin with dance and performance artist Liz McAuliffe. It is set in the near future while the United States is at war with Iran. Khoshbin, who wrote and performs in the work, uses her personal history as an Iranian-American activist to explore the corruption of political ideology and self-identity by participation in the celebrity-driven American media system. She acts as the protagonist, an Iranian-American activist named Layla, whose relationships and beliefs are pitted against dubious external forces as her fame increases and she is cast on a new reality show called Activists in Sexy Solidarity (A.S.S.).

During her residency at Watermill, Khoshbin and McAuliffe will be developing the reality television scene. Khoshbin deliberately creates a handmade aesthetic world for this science fiction allegory using hand-painted stop motion animation, visibly green-screened video, and surreal costumes to highlight the construction of “reality” media. She blends this aesthetic with cultural and personal content such as Persian miniature paintings, video games, and footage where she performs as different characters to emphasize the fragmentation in representing self-identity across media platforms.