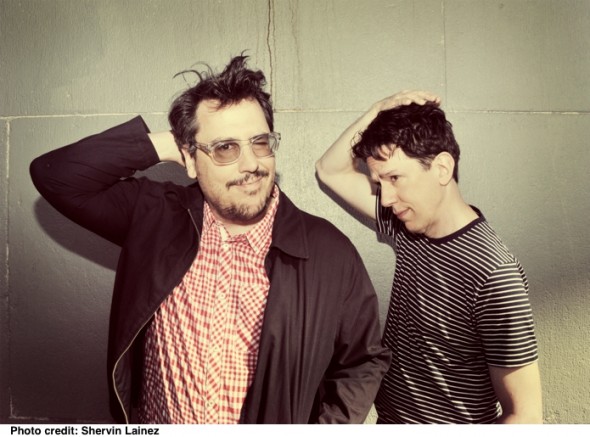 Brooklyn’s original alternative rockers, They Might Be Giants, have taken over North American stages once again on a massive tour in support of their deliciously catchy new studio album, Nanobots. The tour includes stops in Wilmington, North Carolina, Florida,Albuquerque, Phoenix, Los Angeles & a hometown throwdown in New York!

To celebrate the new leg of their tour, the Giants are giving away a free MP3 of infectiousNanobots album cut, “The Darlings of Lumberland.” As John Flansburgh elaborates, “The song itself is a reference to the Darling Family that were early settlers from around Bethel NY (and whose name comes up in more than one Catskill mountain graveyard). At the turn of the last century the area around Bethel was often generically referred to as Lumberland, as lumber was cut and sent down the Delaware water gap to heat New York City.” “The Darlings of Lumberland” was written in collaboration with Stan Harrison, who has played & recorded with the likes of David Bowie (the sax on “Let’s Dance”), Talking Heads, Grace Jones,Duran Duran & Radiohead. Check out “The Darlings of Lumberland” MP3 HERE. We encourage you to post & share!

Nanobots is available at all digital & physical retailers via Idlewild Recordings, and marks the debut offering through the band’s new distributor Megaforce Records. Known for recording numerous themes- most notably The Daily Show with Jon Stewart and the GRAMMY-winning Malcolm In the Middle theme- the band has 2 platinum albums, 2 gold albums and has been nominated for 3 GRAMMYs, winning two. Revered for their energized live show and love of the road, be sure to catch the band live on tour in your city!