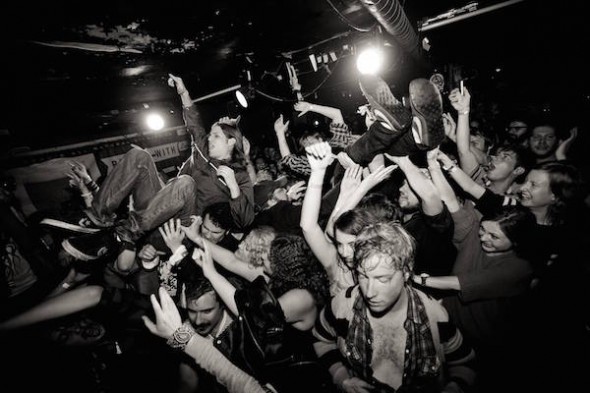 Moshing is an integral part of the live music scene. Formed in clubs and concert halls in the early 1980s, whether it began on the west coast or the east coat is something of a matter of contention. Slam dancing, as it was called in its earlier stages, quickly became a popular response to several genres of music despite the fact that the practice arose from post-hardcore and punk shows. Moshing itself can be defined as the act of knocking, shoving, smashing, bumping into fellow concert-goers while running in a circle. It usually occurs during a particularly hyped part of a live show. The area, or mosh pit, opens due to mutual agreement in the crowd: someone will yell, “mosh pit?” and the audience will open in response – or sometimes due to prompting from the band – the lead singer will draw a circle in the air over where he expects one to form.

Despite its looks, moshing isn’t about violence. The pit aims for a form of consensual chaos amongst the crowd. The primal knocking together, shoving and spinning is not meant to inflict bodily harm, but rather signal a positive response from the crowd. Concert-goers may walk away from the experience with a bloody nose or a couple of bruises, but typically the intention is not malicious and any injuries sustained aren’t serious. What began as simply a physical reaction has become a deeply rooted tradition.

Participation in moshing or similar behaviors such as stagediving and crowdsurfing has given rise to a sort of unspoken social contract. In the same way that a person understands that they may have beer spilled on them at a baseball game or have someone tall sit in front of them at the theatre, you assume a certain amount of risk when attending certain kinds of shows. Certain clubs, certain bands and certain sounds are more likely to result in moshing. There won’t be any moshing at a Beyonce concert, but there most definitely will be at an Anthrax show. Moshing is predictable and for that reason, when a person attends these shows they by default enter into this agreement.

Similarly, each show comes with its own cross section of concertgoers. The percentages of burly men, teenage girls, chaperones, drunks, headbangers, trancedancers and other folk can be all roughed out beforehand. While a mosh pit is technically able to form anywhere, they usually spring up towards the stage. The pit may move and suck in unwilling participants, but overall they can be avoided. 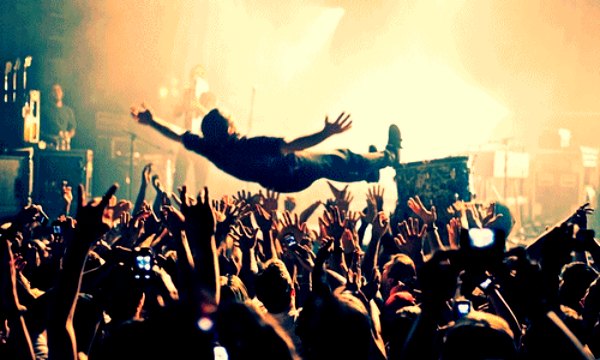 When participating in the swirling mess of a mosh pit, there are subclauses to the social contract that go into effect. The rules are simple:

1. Know when to start or default to more seasoned moshers to crack the pit open.

2. Don’t fight or harass anyone.

4. If someone falls down get them back up and, if necessary, to a medic.

Adhering to these simple guidelines can make moshing safer and more enjoyable for everyone. This mentality, in a way, highlights the main issue with moshing. How exactly does one keep everyone happy? What happens when someone doesn’t know the rules or disobeys them? Whose responsibility is it to uphold the standards? The venue? The band? Or is it up to the participants of the pit to self-govern? What are the repercussions when someone is injured?

When personal injury enters the equation, it becomes a legal issue for which no one wants to be held responsible. Injury is unfortunately something of an unavoidable reality. Depending on the band, the show and the genre, the aggressiveness of the mosh pit changes. It may be a few dozen kids slam dancing in a small club or several hundred audience members forming a wall of death at a large outdoor festival. There is still the same risk factor in both scenarios. The etiquette of moshing is adhered to in both cases, but there is still room for error. For this reason, several venues and some of the larger tours, namely the Warped Tour, have taken strong anti-moshing stances. At this year’s Warped Tour, banners were hung above the stage that read “You Mosh, You Crowd Surf, You Get Hurt, We Get Sued, No More Warped Tour.” The sentiment is simple and justified given the legal climate of the United States; however, it was met with criticism from the music community. Kevin Lyman, who founded the Warped Tour, defended the stance via Twitter. When one concertgoer defended moshing/crowdsurfing as part of the fun, Lyman commented that it also “leads to many lawsuits, ever sat in one [?] I have been through many, no fun and costly.” 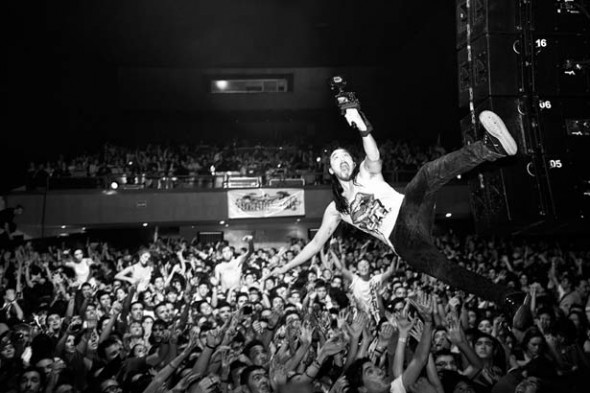 Concert organizers aren’t the only ones to recognize the risk involved in practices such as moshing. When it comes to crowdsurfing and stagediving, acts that depend on the audience members’ ability to carry the weight of a participant, the chance of either party being injured increases. Californian punk rock band Joyce Manor brought up the issue of stagediving during their recent show at Jacksonville’s 1904 Music Hall. Frontman Barry Johnson paused in the middle of “Heart Tattoo” to pull a stagediver from the crowd. He waved the man on stage before asking, “Hey man, how tall are you? How much do you weigh, if you don’t mind me asking?” After the man answered 190 pounds, Johnson turned to the section of the audience whom the stagediver had been trying to surf over. He pointed to one girl and asked, “How much do you weigh? Sorry, that’s really rude. You’re much smaller than him, right? It’s completely unacceptable for him to impose himself on top of you. Completely unacceptable, right? Under no circumstances is that acceptable? OK.” Johnson thanks the audience, asks the stagediver to not “Do that again” then shakes his hand and launches rather seamlessly into “Derailed.” For his efforts, Johnson was berated on social media sites, such as Twitter, and was called a “pussy,” amongst other things. Fans of the band came to Johnson’s rescue, defending his stance on the grounds that no one wants to get hurt at a show, punk or not.

Rather than splinter the issue into discussions on fat shaming and sexism, this incident should have highlighted the crux of the stagediving/moshing issue, which is safety. Moshing and stagediving aren’t wholly unsafe practices, but the incident in Jacksonville brings to question whether stagediving is unsafe or simply unsafe when the stagediver is of a certain size. If the situation was reversed, would Johnson have stopped the show? No. Johnson himself has participated in stagediving and crowd surfing, sometimes even with an instrument. He isn’t anti-stagediving. He was simply asking for a safer environment for the smaller, tamer members of the audience. It is not an unreasonable request and Johnson is not the first to raise the issue of safety. As much as these practices are long standing traditions, the argument against stagediving and similar practices also has a history. Concert-goers have been walking away from venues with a myriad of injuries since the birth of rock and roll and probably before that. 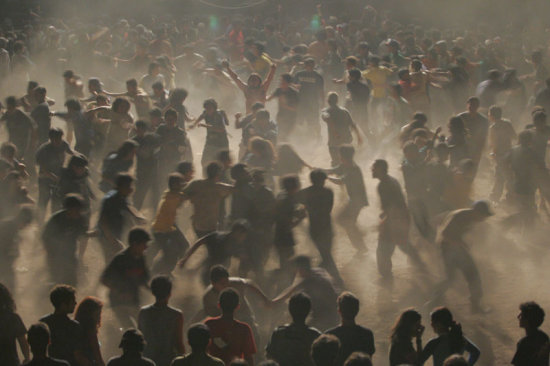 However, sometimes it’s more than just bloody noses and bruises. At a February 2014 show with metalcore bands Bring Me The Horizon and Of Mice and Men, one rambunctious fan jumped off of the balcony at Colorado’s Ogden Theatre and onto the audience below, injuring several people. The man was later arrested on assault charges and jailed. In a statement he later released concerning the incident, the balcony jumper cited the culture of the show as his defense saying, “It’s a hardcore/punk culture atmosphere. If you didn’t come to the show to get wild and have a good time then why would you even show up?” The audience members he landed on had head, neck and minor injuries. Although they could have been moshing on the lower level and getting “wild,” the odds are they didn’t expect anyone to jump off the balcony. It was an unpredictable escalation in behavior that resulted in nonfatal, but still serious injuries.

In other cases they have been fatalities. Several months after the Colorado incident, at a metalcore concert at New York’s Webster Hall for Ohio band Miss May I, one fan sustained major head injuries after stagediving and failing to be caught. He later collapsed outside the venue and died. There had been a similar incident in January during a show in Switzerland by Los Angeles’s hardcore band Terror. The audience again failed to catch one stagedivier as he jumped from the stage. In this case security was able to get him to the venue’s emergency unit, but the man didn’t seek further medical attention and later died. Both stagediving cases illustrate instances in which audience members were participating in the “atmosphere” of the show as it escalated. At the Terror show, the band was even contributing to building the said atmosphere. Lead singer Scott Vogel had been prompting the audience with, “Stage dive! Stage dive! Come on!” So why wasn’t the audience ready? Did they try to catch him? Were they simply unable to hoist him into the air? Did he dive into a less-crowded section? Were people not packing in enough? Perhaps, unlike the case of the balcony jumper, the audience was aware and able to catch him, but did not for whatever reason. Perhaps, both deaths were accidents.

In response to similar incidents, members of bands like Fugazi, The Smashing Pumpkins and Dream Theater, have spoken out at various points in their careers about the dangers of crowdsurfing and moshing. In a recent interview with Noisey, Sean Bonnette of Arizona’s folk-punk band Andrew Jackson Jihad commented, “While we ask our audiences not to stagedive, I don’t think it should be flat-out banned. In the right environment, stagediving can be awesome (e.g., Pantera). I do, however, feel that if a band asks the audience to not stagedive, that request should be honored.”

The other opinion held, honors the tradition of moshing, stagediving and crowdsurfing. In the same interview, Benny Horowitz of New Jersey punk rock band The Gaslight Anthem stood up for stagediving and commented that, “Even though it’s an odd tradition, I think it’s a unique and subversive element to punk and hardcore shows. If you go to one of these shows and stand up front, you know the risk and, to me, are partially accountable for whatever happens. As long as there is no malicious intent, I’m up for it.” Horowitz brings up a valid point. The intent of the crowd surfer or mosher is rarely to cause harm, however, intentions are hard to keep track of when you’re in a spiral of elbows and flailing limbs.

When it comes to moshing, it is important to keep yourself and those around you safe. This may mean moving to a less rowdy part of the crowd when the audience gets too rough or holding off on the stagediving when the front thins out. Adapt your expectations and your behavior to meet those of the people around you rather than demanding an experience – like a room of screaming fans carrying you through the air. If the consensus of the crowd is to mosh, meet that or move. Stay aware of those around you. Otherwise, you might find yourself unprepared to catch the crowd surfer that is twice your size and heading straight for your head. Know your bands, know your shows and know their audience. At the same time, be mindful of the “well you are at a punk show” mentality. Don’t let “punk” become synonymous with “unsafe.” Stay smart. Stay safe. Be righteous to one another.

– Article by Zoe Marquedant for The Untitled Magazine

READING THESE DAYS: WASTE OF TIME OR A WAY TO CHANGE YOUR LIFE?