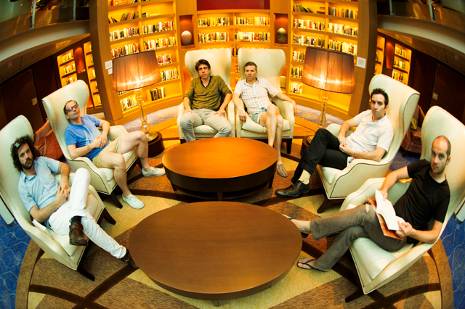 On April 29th, !!! will release their new album ‘THR!!!ER’, it is the fifth full-length from the sonically adventurous sextet and their third for Warp Records. The band have released a teaser video online: http://youtu.be/SCOAm6qiIpE

Guitarist Mario Andreoni explains how their latest album came to fruition, “Over the course of many long van rides and post-coffee verbal riff sessions, we concluded that Thriller didn’t merely represent the selling of a lot of records, it became synonymous with an artist(s) and/or genre(s) artistic high-water mark.  INXS’ Kick is the Australian Thriller, Alanis’s Jagged Little Pill is the Canadian Thriller, Wham’s Make It Big is the blow-dryer’s Thriller, every recording by the 13th Floor Elevators is the dosed-man’s Thriller, Sister Ray by Velvet Underground is the Thriller of musical fever dreams. One day at the studio, Nic [Offer, vocalist] drew THR!!!ER on a napkin and I liked it, then we made our THR!!!ER.”

Famous for their high-energy live shows and relentless touring schedule, the band have really focused their efforts on crafting an album with tighter song structures. To help with this, the majority of the album was recorded with Jim Eno, the drummer in Spoon and one of the key forces behind the boards for the band.  Like many people, Jim was a fan of !!!’s live show, but he felt that they too often tried to capture these performances in the studio. Instead of trying to chase this feeling, Jim encouraged them to create a different type of excitement by using weirder sounds, inventing new dynamics within each song and introducing unexpected changes. “They had this working flow that was a little rigid and I wanted to break them out of it,” says Jim.

The resulting record is more immediate, more honest and more interesting whilst still retaining their sense of fun.

!!! are a bicoastal band with over a decade of history. Nic Offer, keyboardist Daniel Gorman, and new bassist Rafael Cohen (formerly of El Guapo and Supersystem) all live in Brooklyn, drummer Paul Quattrone resides in Pittsburgh, keyboardist Allan Wilson remain lives in Portland, Oregon, while Andreoni remains in Sacramento, where the group was formed. Understandably, writing new music wasn’t the easiest of processes. “In the past we just put albums together any way that works,” says Andreoni, “That usually meant a lot of jamming on loose ideas. For THR!!!ER, !!! went into the studio with everything written and a strong sense of each song’s shape.”

“We’ve never tried to make the same record twice, we might have accidentally, but we’ve always tried to push on. For this one it felt like we definitely shoved off from the shore,” says Offer.

!!! have already been confirmed for TV on the Radio’s ATP Weekend in May, more UK live dates are to be announced soon.

1. Even When The Water’s Cold

2. Get That Rhythm Right

0
The Untitled Magazine February 1, 2013
No Comments Yet