Last night, designer and film director Tom Ford was awarded with an Honor at the 2014 Los Angeles Inspiration Gala in recognition of his enduring support for The American Foundation for AIDS Research (amfAR) and the battle against AIDS. The gala took place at Milk Studios in LA and was hosted by Gwyneth Paltrow, who sported a sleek Tom Ford suit with no shirt underneath.

Having lost many friends to AIDS in the 1980s, Ford has been a long-time supporter of initiatives against the illness. During his time at Gucci, in addition to overhauling the brand and turning its revenue from $200 million to $3 billion, he also established Gucci’s charitable work for people living with HIV and AIDS, which won him a Commitment to Life Award from AIDS Project Los Angeles.

Rihanna, who presented the award to the designer, also wore Tom Ford, although her dress was far more revealing than Paltrow’s deep-V suit jacket, with embellished nipple details on transparent fabric. “Everyone looks good in Tom Ford,” she said. “Over the past 20 years, Tom Ford has been honored with every major fashion award there is. Tonight, we honor him both for his incredible talent and for what he stands for. We honor him for doing good while making us look good.” 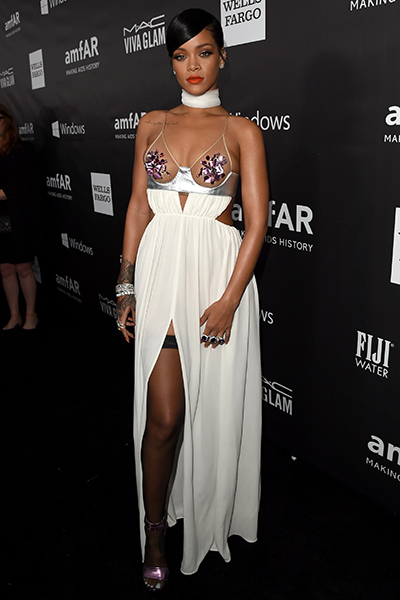 The evening began with a performance by Coldplay’s Chris Martin, followed by a cocktail reception, dinner, and, finally a live action.  Other celebrities that came out to congratulate and support the designer included Miley Cyrus – who also made a splash with her Tom Ford s&m inspired ensemble, Lea Michele, January Jones, and Justin Timberlake.

Launched in 2010, amfAR Inspiration Series celebrates men’s fashion and style, while simultaneously raising funds for their AIDS research programs. To date, Inspiration Galas have been held in New York, Los Angeles, Paris, Sao Paolo, Rio de Janiero, Toronto, and Miami. Via the Inspiration series and other high-profile fundraising events, amfAR has, since its founding in 1985, invested over $338 million into its programs, and awarded over 3,300 grants to research teams worldwide.