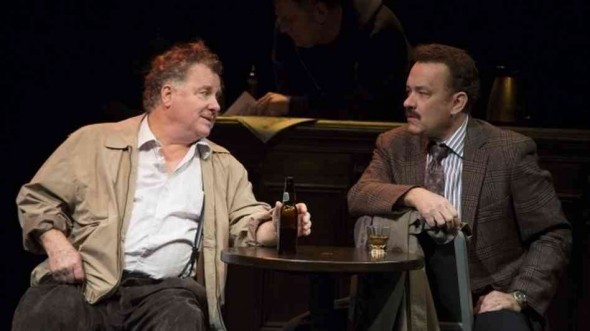 Tom Hanks made his transition from the silver screen to the Broadway stage April 1 in Lucky Guy, late playwright Nora Ephron’s epitaph to the bygone days of journalism. No April Fool’s jokes here; the two-time Oscar-winner reportedly took to the stage like a “fish to water” (Variety).  That is, a loutish, mustachioed, cuss-mouthed, bottom-of-the-gin-barrel type of fish. The play is an affectionate chronicle of the final throes of the boys-will-be-boys, hard-drinking, hardscrabble, notepad journalism of the ‘80s and ’90s. It’s a world Ephron inhabited during her years at the New York Post, and a world which no longer exists in today’s digitized futurescape of publishing. Hanks calls the play both a “love poem to journalism” and tribute to the charismatic playwright, who died last June at 71 from acute myeloid leukemia. It’s a bittersweet last act for everyone involved, as Ephron had hoped to be there for the play’s opening night.

“Well, selfishly, I did this to hang out with Nora,” Hanks says. “The original part of this was: Well, how bad can that be? Go off and, you know, be on Broadway finally and do it with Nora and she’d be there every day and we’d be batting around ideas.”

Hanks previously starred in two of Ephron’s films, the quintessential and timeless romantic comedies Sleepless in Seattle and You’ve Got Mail. Lucky Guy is a very different kind of story. Far from a romantic comedy, the play stays true to the “boy’s club” era it depicts, featuring an ensemble cast of 12 men and only two women. Many of the play’s characters are based on their real-life counterparts, including that of Hanks’ character, tabloid journalist Mike McAlary. McAlary may have been a “lucky guy,” but he was by no accounts a nice one. Hank describes him as a “real jerk” but reviews have lauded Hanks with his irrepressible ability to imbue McAlary with the natural charm that has buoyed the actor along during his decades-long career.

In a sobering parallel to Ephron, McAlary’s last major story exposed a brutal act of police abuse in 1997 and earned him the Pulitzer Prize, but he died of colon cancer just months later at 41.

It seems no doubt that director George C. Wolf, Hanks and crew would have made Ephron proud. In the first week of previews, the play already took more than $1 million in ticket sales, almost as much as hit productions The Book of Mormon, The Lion King and Wicked.

-Erika Broad for the Untitled Magazine

NIKITA STAR NOAH BEAN SITS DOWN WITH THE UNTITLED MAGAZINE