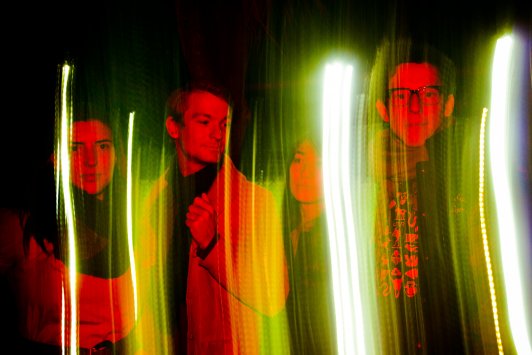 After graduating from Berkeley, lead singers Emma and Keith cast off to the far ends of the romance language world. Keith headed across Brazil for field research on renewable energy, and Emma to Spain in search of spiritual adventure and surf. Immersed, they both found themselves suddenly at the limits of their language–and in nylon-string guitars, they found a way to make sense of everything they were losing in translation. After those months lived abroad, they came home to Oakland with a vision: to craft together a sound from the pensive warmth of Brazilian jazz, the tight songcraft of Spanish pop, and the hypnotic rough edges of basement dream pop.

Returning to Oakland, they teamed up with Ian Quirk and Hannah van Loon; both classically trained musicians from a young age. Ian played percussion professionally to play the bills in college–and in Trails and Ways he’s brought his obsessive mind for detail and tight layering to the role of DIY production wizard. Hannah trained in piano and violin from age three, but it wasn’t until high school that she took up guitar–by learning the grooves of the Beatles catalog inside and out.

The band practices and records in Ian’s bedroom at Oakland cooperative house, T-Rex Manor. The music that emanates from this makeshift studio are richly layered, but built on simple, tight structures. All four members sing, braiding male and female voices down landscapes of percussion, reverbed guitar hooks and tidal synthesizers. The lyrics are verbal graffiti on the political superstructure, and lovers’ unsaid conversations; crossing at the borders between Spanish, Portuguese and English.

Coming out of Oakland, Trails and Ways is wrapped up in the local scene of DIY pop experimenters and R&B producers surrounding Non-Market, the community label through which the band is releasing Trilingual. Trails and Ways is touring across the US/Canada behind the new EP. Live, the band’s four voices and tight solos flow over driving, dance beats. Their visceral live show is powered by the four matching crystals they wear: amethyst, agate, larimar, turquoise.