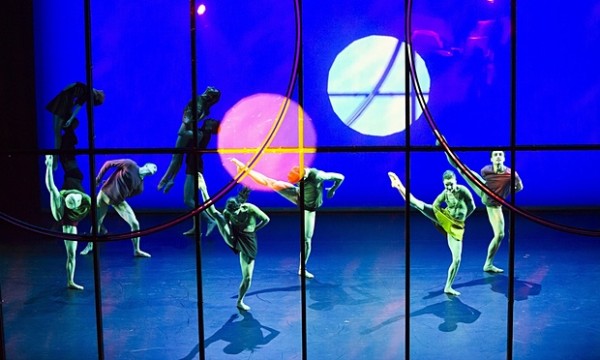 Don’t expect to see Tree of Codes and be swept away by the movements of the dancers, who throng the stage — at first in bare skin toned leotards, progressing into primary colors later — in this obtuse loose interpretation of Jonathan Safran Foer’s novel of the title’s name (which itself is an appropriation of another novel, The Street of Crocodiles by Bruno Schulz.)

Sound confusing already? Because it is.

The lighting effects — strobes of red, orange,and yellow lights — by Berlin based Danish artist Olafur Eliasson, transport one into a psychedelic trance, propelled by the throbbing rhythms of the original score by Jamie XX. There are strong beats, bell like sounds, and  keyboard sequences. in one scene, we heard the sound of rain pouring, which provided a nice respite  for the dancers, who could then pirouette and developpe’ their long limbs without haste. But the general frenetic pace required to keep up with the music spurred the technique of choreographer Wayne McGregor into often jaunty movements that made both the modern and ballet dancers appear more like background in a living art canvas, rather than the main event.

Give yourself over to the music and beams of bright colors changing the set at intervals and suddenly you’re transported into a rave where the McGregor company performers in their vertical leaps and torso gyrations could have been mere club kids. And of the six Paris Opera Ballet stars who graced Tree of Codes, etoile Marie Agnes Gillot — a tall dancer often dressed in a black leotard that made her stand out against the color form costumes of the others — seemed to struggle with physical transitions against the fast moving seduction of the music itself.

The beginning of the production, when the stage went dark and several dancers performed with only tiny white lights to illuminate their gestures, hinted at mystery, showed great promise. And a video where several hands played into different angles from mirrored images at the back of the set seemed to indicate an intricate fantasy that was about to unfold.

The result proved to be more a living art piece that toyed with the senses in a fun way, but as a choreographic showcase, the music while wonderfully transported, seemed a mismatch for the choreography, unless the whole idea was to feature dancers as background props.

**Tree of Codes now at Park Avenue Armory until Monday September 21st. It will travel later this year and in 2016 to Paris, London, and Miami.

Article by Susan Kirschbaum for The Untitled Magazine