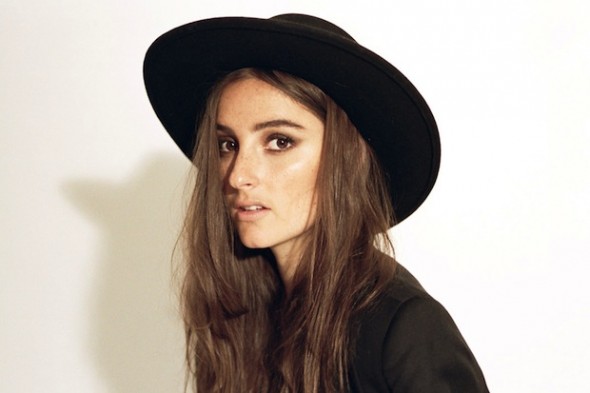 Los Angeles-based songstress and Coachella favorite Banks is set to release her debut album ‘Goddess’ on Harvest Records September 9th. Featuring production by the likes of Lil Silva, SOHN, TEED, Shlohmo, and Tim Anderson, ‘Goddess’ is a dynamic fourteen song collection that instantly affirms why the bewitching singer is rapidly becoming one of 2014’s most exciting new artists.
Since the release of her debut EP ‘London’ in 2013, Banks has gone from being L.A.’s best kept secret to an international phenomenon who has sold-out headlining shows around the world, graced the cover of V Magazine’s music issue alongside Lorde and HAIM, and landed in the Top 3 of the BBC’s highly lauded ‘Sound of 2014’ poll, whose previous nominees have included Adele, Frank Ocean, Sam Smith, and more.  The EP’s four luminous tracks introduced music lovers to Banks’ dark sonic world – a place where mid-90s Aaliyah R&B meets glitchy electro sparks; where the intense emotionality of early Fiona Apple meets an expressive, velveteen voice capable of wrapping itself around a perfectly-formed chorus.
On ‘Goddess,’ Banks delivers on these sounds and then some. The debut is a hypnotic, visceral debut – a testament to Banks’ core songwriting chops and her innovative production choices.  Featuring nine new songs alongside fan favorites that have already been released, ‘Goddess’ was recorded all over the world – Los Angeles, Vienna, London – in between shows opening for The Weeknd, playing at SXSW, and more.  The LP moves between slinky R&B jams, click-driven, hip-shaking songs, and string-laden piano confessionals, all tied together by Banks’ unique voice.
After being called one of the seven artists to see at this year’s Coachella by Time, Banks will be embarking on her first ever, sold-out headlining tour this spring, playing many of the forthcoming songs from ‘Goddess’ (see dates below).  She will also be making select stops at this year’s Bonnaroo, Governors Ball, and Sasquatch festivals.
The album will be out on iTunes September 9th.
Catch the the title track ‘Goddess’ below.

GIRLS WILL BE GIRLS: MUSINGS OF A GIRL NOT YET A WOMAN