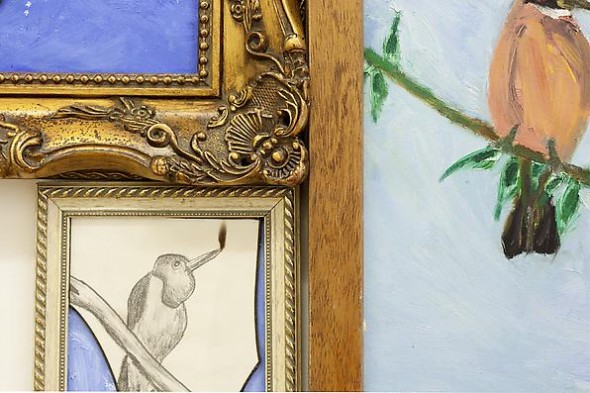 Marc Jancou Contemporary, Geneva presents Wings of Light: Part II, an exhibition of new works by Vahakn Arslanian. Born in Antwerp and raised in New York City, Arslanian began painting and working with glass at an early age, shattering glass objects as a means of expression. Almost entirely self-trained, Arslanian has developed this childhood propensity for destruction into a distinctive art-making practice without the benefit of extensive formal training.

Arslanian’s work explores the equilibrium between destruction and creation. His prolific output of mixed-media works feature drawings and paintings of a fixed iconography that conjures a surrealist sensibility. Part II of the exhibition focuses on Arslanian’s recurrent use of bird and commercial airplane imagery. These subjects are often manipulated in manners that articulate the artist’s vision of beauty and absurdity – a plane with bird’s wings, a bird with a candle on its head – and reveal a system of cultivated personal symbols and meaning. His use of bird imagery derives from a pair of white pigeons the artist once kept in his studio, having rescued them from a Chinese butcher shop. Arslanian constructed a large cage for them where they lived for two years, inspiring the artist to incorporate them, and later other birds, into his paintings through their postures, expressions, and the multitude of emotional and personal archetypes, often humorous, that he observed in their behavior.

Incorporating antique, hand-blown window glass – sometimes broken, sometimes intact – as well as found objects such as antique window sashes and hardware, the artist creates a unique picture-frame for each work. The use of these discarded objects into his pieces positions the artworks at the intersection between the precious and the ruined; the created and the destroyed.