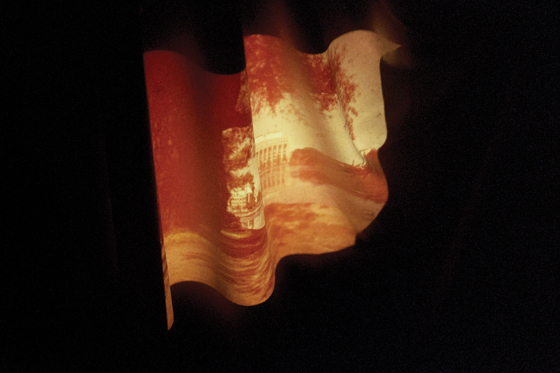 Night Gallery is presenting a solo exhibition by Valerie Piraino at the Present Tense section of the 2013 Artissima International Art Fair in Turin, Italy. The exhibition will run all three days of the festival from November 8 to November 10.

Emptiness, isolation, and the passage of time are running themes in Valerie Piraino’s exhibition aptly titled “Company.” By combining slide projections with fabric transfers, Piraino creates an ambiguously empty interior space.  It is unclear whether the room is a foyer, hallway, or film set and whether the “company” has just left or disappeared a long time ago.  Nevertheless, it becomes clear that isolation and obsolescence consume this place and nostalgia can’t fight off the overwhelming feeling of being left behind at the station.

Valerie Piraino lives and works in New York City. She received her BFA from the Maryland Institute College of Art and her MFA from Columbia University. Recent and forthcoming exhibitions include “Could Not Bear the Sight of It” at the Jane Addams Hull House Museum, in Chicago (2014), “Photoplay” at Cindy Rucker Gallery in New York (2013) and “Body Language” at the Studio Museum in New York (2013).

The Artissima Art Fair is a foray into experimental, cutting-edge visual art and the most innovative galleries around the world. It occurs yearly in Oval, a large architectural pavilion built in Turin, Italy for the 2006 Winter Olympic Games. 2012’s festival saw an audience of over 50,000 professionals, journalists, artists, and visitors.