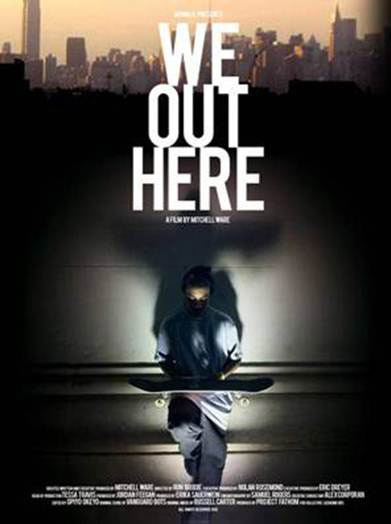 From the crowded playgrounds in Brownsville, and through the bustling streets of the Lower East Side, the Airwalk x Already Famous collaborative micro-documentary, We Out Here chronicles the movement of a group of urban skateboarders in New York City. Under the direction of a fundamental government system they feel to be too disconnected from youth culture, these societal outsiders retaliate by taking to the asphalt in an attempt to find some self-gratification. Tensions build within individual families as experiences told through first-hand accounts and psychological commentaries reveal how society securitizes these innovative visionaries. They find sanctuary in their time spent building eternal bonds through common backgrounds.

Directed by Ron Brodie, creative director for the Brooklyn-based production company Project Fathom, We Out Here demonstrates the insecurities of starting out in a monopolized commercial industry. Co-founder of the grip tape company Trophy Grip, Wade Yates explains how his commitment to skateboarding and enthusiasm for launching a skate brand propelled him to new milestones. With an increasing sense of responsibility to the skate scene and notoriety amongst the NYC skating collective, skateboarders Cherry Puffin, Justin Kinard, and Keith White earn a streetwise education they couldn’t receive while attending public institutions. We Out Here motivates younger audiences to follow their passions while detailing the disadvantages of living in an urban community.

The determination and unyielding work ethic of these future pro skaters justifies the opportunity for exposure and escape from their tough neighborhoods. Most of the more somber antidotes are usually met with undertones of optimism expressed in their side remarks. We Out Here is a short film with a run-time of about a half-hour. Shot in classic black and white, the scenes are brief, but compelling. The interviews are combined with skate footage to add entertainment to the narratives. Hitting several socioeconomic arguments, We Out Here is an informative skate video with multiple lessons for audiences of all ages and skill levels.

– Jose Terrero for The Untitled Magazine

0
The Untitled Magazine November 30, 2012
No Comments Yet