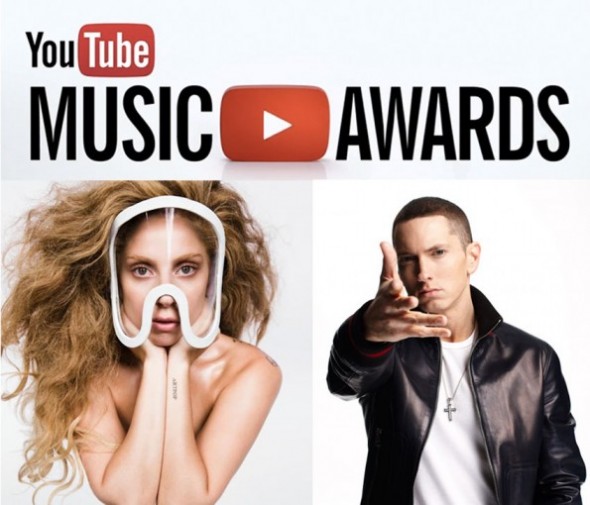 In this day and age, if your viral video came anywhere near a million views, you’re essentially considered a true success. Forget the Grammy Awards, your rise to stardom is imminent.

Okay, all jokes aside, if you are a viewer of award shows then you should understand the concept of hierarchies. This comprises of where one stands within the ladder of opulence and if one simply, matters within the industry.

YouTube just premiered their first-ever YouTube Music Awards in New York City this past Sunday at Pier 36. Hosted by Jason Schwartzman and co-host Reggie Watts, it was certainly a spectacle to see. Performances were made by Lady Gaga, Arcade Fire, and Eminem – the performances were directed by John Gonzalez and Spike Jonez. The performances were filmed as ‘live music videos’ with the featured musicians playing a supporting role. This is no luxurious award show, especially from the scores of award shows we are more familiar with. However, this hour and a half event did draw in quite the media attention.

The function was theoretically, an equal playing field. Even with most moderate expectations, the YouTube Awards only had 220,000 viewers tune in at its peak. Although, it was available streaming online – let’s hope that’s where the rest of the audience went. 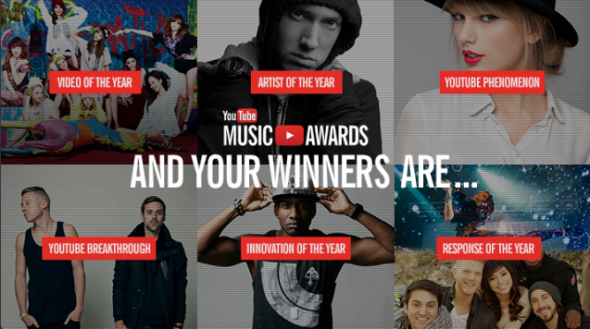 – Video of the Year: Girl’s Generation “I Got A Boy”

– Artist of the Year: Eminem

– Response of the Year: Lindsey Stirling and Pentatonix “Radioactive”

– YouTube Phenomenon: Taylor Swift “I Knew You Were Trouble”

– Innovation of the Year: DeStorm “See Me Standing”

The difficulty spotted immediately upon the pilot award show was its no agenda design. Sure, music videos thrive on the YouTube site, views are counted per visit, and the Internet is a realm within itself. Having said all that, YouTube is owned by Google, a market capital worth $340 billion, last recorded by Forbes. You would assume a better-regulated, professional production assembled by pros would have been presented. To add more dismay, it was Spike Jonze who carried out as the event’s creative director. Let’s not even go into detail, of the several live stream glitches and technology-idled blocks.

In spite of the experimentation, and our already predetermined knowledge of mass-coterie-award-shows, YouTube’s bizarre yet unique experience might have just earned its right to try again next year. I would have to say established artists, Lady Gaga and Eminem, indisputably made the show. Following sets from Gaga and M.I.A, Slim Shady performed his ‘Marshall Mathers LP 2, Rap God’, against a white backdrop – closing the show in style. Both types shined in their true form with next to nothing in common. Viewers were able to stream the show live, if they were not present in Pier 36 themselves. If you missed the viewing, we saved you the streaming playlist. 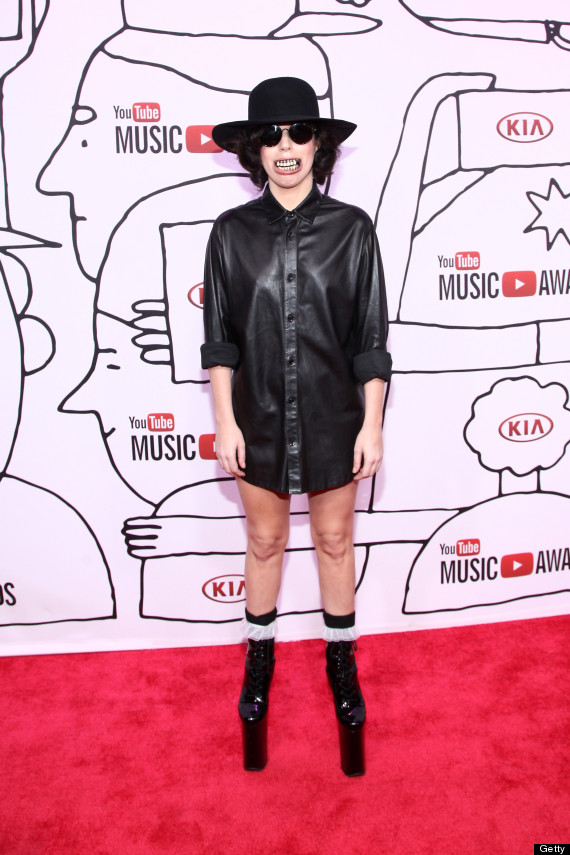 The media frenzy over Gaga’s pearly whites is inteed just a bracelet from New York based jewelry designer, Danielle Hills. Can’t a lady just contribute to her era of odd attire at a music award show?

To conclude, there is much speculation of YouTube officially announcing a paid streaming music subscription plan. Comparable to Pandora or Spotify, for about $10 a month. This further seals the evidence-based, marketing strategy behind the award show.

This could mean more advertising and content creation opportunities, thanks to a growing online user base. YouTube, you cunning fox.