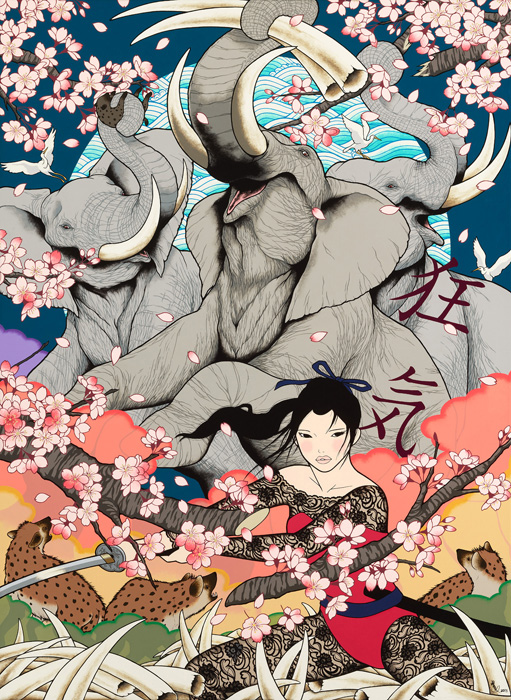 Kayukawa places her sweetly demure figures amidst scenes of wild beauty, intertwining themes of femininity and nature. In “TEREYA (Shyness),” a Japanese beauty looks over her shoulder to meet eyes with the viewer, with one hand nuzzled under the chin of a tiger and a dandelion held in the other, in a supreme balance of power and delicacy.

The animals of Madness range from the stampeding elephants of the artist’s eponymous painting to snow leopards engaged in a spirited romp with young monks. Japanese folklore and Shinto animism imbue each candy-colored composition in playful ways. “KITSUNE MATSURI (Fox Festival)” pays homage to an annual festival of Japan and features the associated Inari (spirit) mask and face painting. Foxes are popular subjects of Japanese folktales and believed to possess magical abilities that increase with their age and wisdom, among these the power to assume human form, often as beautiful women. Icy blues dominate the palate of “OORORA MOCHI (Aurora Mochi),” save for the swirls of glowing greens throughout the night sky, replicating the light display seen only in Arctic and Antarctic regions when charged particles and atoms collide in the high altitude atmosphere. Beneath this natural phenomenon all manner of wildlife – seals, wolves, bunnies, even a curious whale; harmoniously interact while a family of polar bears make mochi with traditional wooden mallets and mortar. The dreamlike imagery and beautiful detailing are balanced by the Ukiyo-e use of elegantly simple lines. With a precise hand, Kayukawa creates a world of serenely magical wilderness.