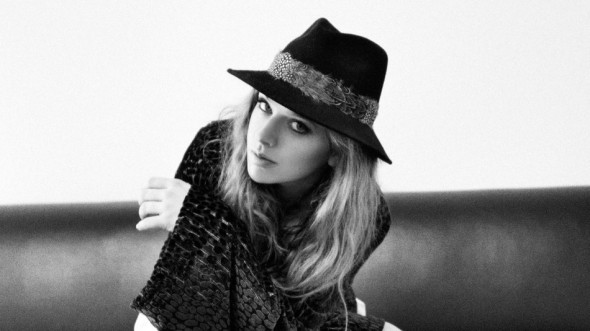 After a successful run with “Put The Gun Down,” off her full-length album Til The Casket Drops, ZZ Ward recently debuted her new single, “365 Days” with a rousing performance on Jimmy Kimmel Live! The song (written by Ward) showcases her soulful voice, keyboard prowess and echoes a sentiment of empowerment as a bad relationship fizzles, making the song not only relatable but a fan favorite. The video, which shows a poised Ward as the relationship spirals (literally) to its end, can be seen here.

It’s been a whirlwind 365 days for ZZ as she’s gone from an underground mixtape to critically acclaimed album release, sold out tours, appearances on Conan, Jimmy Kimmel Live, The Tonight Show with Jay Leno, Last Call with Carson Daly and given buzzworthy performances at SXSW, Firefly, Wakarusa and Sasquatch, sharing the stage with the likes of The Lumineers, Kendrick Lamar, Vampire Weekend, and more. Not to mention, ZZ designed her own line of fedoras for Broner hats and saw her music featured in Nashville, Pretty Little Liars, The Voice and We’re The Millers.

Later this month ZZ will continue her summer coast-to-coast run performing at Live On The Green, the Harley Davidson Festival, Bumbershoot and Music on the Half Shell in Roseburg, OR where she was raised — a true homecoming moment for ZZ who once sold her CD’s in the parking lot at the local mall. The summer run will be followed by the kick-off of her fall headline tour, The Down and Dirty Shine Tour 2013.

ZZ Ward: THE DOWN AND DIRTY SHINE FALL HEADLINE TOUR