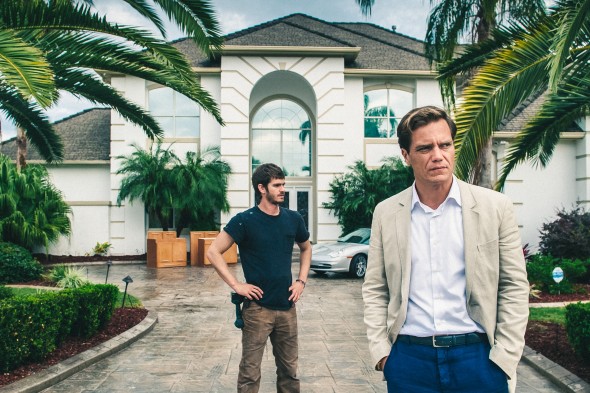 99 Homes, directed by Ramin Bahrani (Chop Shop), is a riveting new look into the sleazy underbelly of real estate and the horrors of foreclosure amidst the economic recession. Before Ramin Bahrani screened 99 Homes, previously screened at the Toronto Film Festival, at this year’s Sundance Film Festival he spoke of how “the world was turned upside down a few years ago.” The highly-researched film gradually became a thriller in his eyes, as he said. He mentioned how “1% of the world controls wealth of this planet” and then before the picture showed summarized it as a film “about you, your sister, your father, and your grandmother.” It’s true that 99 Homes is a real-life nightmare. It’s a complex film that grips you almost immediately from the first shot of the film, telling us that what’s about to unveil is going to pretty ugly.

Andrew Garfield stars as the central character, Dennis Nash, a father who works as a construction worker and whose house gets foreclosed by a realty company led by Richard Carver (Michael Shannon.) Dennis’ mother Lynn (Laura Dern) is the mother figure for his son Connor, a young boy whose whole life has revolved around this specific neighborhood in which he grew up. What follows after the foreclosure is abruptly settled becomes a spiraling paradigm of digression. Richard Carver is an e-cigarette chain smoker whose basis in real estate is practically stealing money from others as he forecloses deals.

What really works for Bahrani’s tense thriller-drama is Garfield’s vulnerable performance as Dennis Nash, a man who ultimately cares for his son’s well-being and will go to any length just to make sure he has a home, an education, the support. Set in Orlando, Bahrani sets an environment in which homes are replicates like those “little boxes on the hillside,” lacking character and life. The backdrop for this film is reminiscent of something like Antonioni’s L’Avventura, echoing something grim, menacing, and omnipresent. Even when Nash, his son, and his mother have no choice but to move to a motel room we have the same mirrored environment, replicate after replicate. It’s scary stuff when viewers see the other families affected by the same predicaments, homes being evicted and left homeless.

The character switch for Dennis Nash is drastic too. When Dennis decides he’s run out of options he decides to work for Carver himself, the one who arrived on his doorstep, the bearer of bad news, Dennis, the single father, begins to hustle and gets the foreclosures closed at such a fast momentum we can’t even believe this was the same guy we had seen earlier in the film. These characters are so dynamic, never dull, and Shannon nails it as the antagonist of the film.

The contrast between Dennis’ and Carver’s domestic life is strongly polar opposite. There’s a scene when Nash actually arrives to fix a ceiling at Carver’s home and his children run around in princess costumes. They have everything given to them. These children have the pool, the living room, the comfy beds, and probably just anything else they may want within the confines of this Floridian McMansion. Lynn, Dennis’ mother, becomes increasingly suspicious of the time these two have spent together, the rapid pace in which Nash has now become part of the realty company, and Carver’s discrepant moral code. “America doesn’t bail out losers. America bails out the winners,” Carver states after admitting his own father was a roofer. No wonder why this man became so infatuated with money and became who he is. It’s a strong moment in the film as the menacing fluorescent lights of the office building sizzle above both characters. The tensions that amount to the film’s harrowing conclusion will leave you breathless and thinking for quite some time. 99 Homes is a timely film and one that speaks of integrity, power, and family. It sicks with you and Behrani’s own research, which included speaking to real life families, shows as an end result that’s hard to shake off.

Article by Taylor Ghrist for The Untitled Magazine