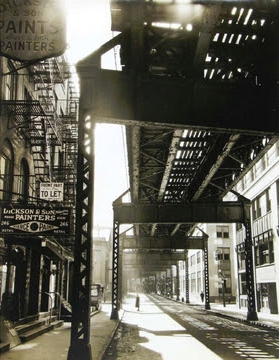 Abbott & Marville: The City in Transition

The Howard Greenberg Gallery presents an exhibition of photographs by Berenice Abbott and Charles Marville, on view from February 27 – April 11, 2014. Documenting now vanished streets and landmarks, Abbott and Marville: The City in Transition contrasts two cities – New York in the 1930s and Paris in the 1860s. Many of the images are on public view for the first time. An opening exhibition will be held on Thursday, February 27, from 6-8 p.m.

One of the last century’s greatest photographers, Berenice Abbott (American, 1898-1991) took photographs of New York City for the Federal Art Project of the Works Progress Administration (WPA). With a clean modern eye, Abbott sought to preserve the new face of New York in the 1930s. After eight years in Paris where she worked as Man Ray’s assistant, she returned to New York in 1929 to find that during her absence, many 19th –century buildings had been demolished to make way for skyscrapers.

Inspired by Eugène Atget, whom she had met in Paris shortly before he died, Abbott had been struck by what she described as the “unadorned realism” of his photographs. Every Wednesday she documented the social, commercial, and architectural aspects of New York City. From an Esso gas station to the Lyric Theater to the elevated Second and Third Avenue train lines, Abbott focused her lens on all aspects of the city including busy commercial streets, row houses, parks, docks, and bridges in all five boroughs – a project that would stand as the centerpiece of her career.

When the Stock Market crashed and the Depression began, she struggled to pursue her project. In 1935, the Federal Art Project offered her a grant, which included a $145 monthly salary, assistants, and a car. Five years later, she had completed Changing New York, images that have come to define New York City in the 1930s. In 1939, the budget for the Federal Art Project was cut, and Abbot lost her job.

One of the most important photographers of the 19th century, Charles Marville (French, 1813-1879) is known for his images of Paris both before and after its medieval streets were razed to make way for the broad boulevards, parks, buildings, and streetlights that have come to represent the City of Light. 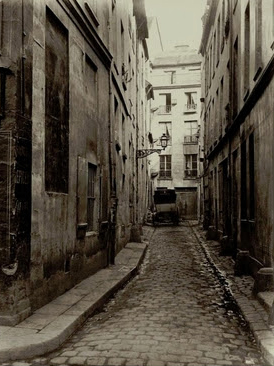 The massive transformation of Paris was launched by Emperor Napoleon III and his chief urban planner, George-Eugène Haussmann, beginning in 1853. Not only did Haussmann seek to beautify the city, but to also improve traffic circulation, the sewer system, and other public works. All in all, it is said that the project transformed 60 percent of Paris’s buildings, creating more parks, light, and space as well as new bridges, government buildings, and an opera house.

As official photographer for the city of Paris, Marville recorded the disappearance of the Old Paris and also focused on the creation of the new city, an urban vision that dominates Paris even today. From 1865 to 1869, his subjects ranged from a spectacularly elaborate wrought iron gate at Parc Monceau to a gas lamp suspended from an arcade at the Louvre to a street lamp and view at Gare de l’Ouest in Montparnasse.

Abbott and Marville: The City in Transition at Howard Greenberg Gallery coincides with an exhibition at The Metropolitan Museum of Art in New York entitled Charles Marville: Photographer of Paris on view January 29 -May 4, 2014.