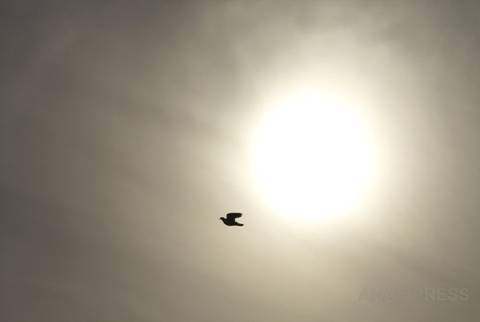 Ahae – THE EXTRAORDINARY WITHIN THE ORDINARY

THE EXTRAORDINARY WITHIN THE ORDINARY, Ahae’s second major exhibition of photographs in France, will be presented throughout the gardens of the Orangerie at the Palace of Versailles from June 25 through September 9, 2013. On view for the first time, THE EXTRAORDINARY WITHIN THE ORDINARY includes works in which all the languages of nature are explored by the photographer’s watchful eye: animals, movement, shadow and light. All of the photographs are taken from the same window… a radical challenge. From this unique viewpoint, Ahae aims to arouse our ability to be amazed by the simplest things and to perceive the primal messages they express. He urges us to open our eyes, see the natural world around us, and do whatever we can to protect it before it is too late. THE EXTRAORDINARY WITHIN THE ORDINARY, an installation of monumental and large photographs, is part of the Palace of Versailles’s 2013 tribute to André Le Nôtre, the creator of the Versailles gardens. Admission is free.

Subject diversity
Though taken from the same window, Ahae’s works embrace a surprising diversity of subjects. Nature is out there, present and mobile. Its variations and nuances are the subject of a wild, moving quest—the permanent wonder offered by this landscape world, with its spaces and its inhabitants. Indeed, an impressive bestiary inhabits Ahae’s photographic world. The animals are the source of simple amazement in their dialogue with the elements, sky, earth and water.

The poetic span of a landscape
If every morning, winter and summer, Ahae manages to capture all the flavor of the landscape he sees from his window, it is because he understands its intricacies. From sunrise to the chiaroscuro of the moon, this microcosm is arranged around shared time. In succession, visitors traverse all the key moments of a day of the photographed landscape: a dreamed day, where we see the same subjects and events at the same time across the seasons. Variations in climate, like different times of the day, are a matrix in which the banal becomes exceptional. And focusing our gaze on “practically nothing”, the ordinary becomes extraordinary. Dialogue is established.

The languages of nature
Through his photos, Ahae’s intent is to spur visitors to adopt a curious and attentive focus on that which speaks the language of nature. Those who know how to listen already understand the words of silence. In a world of familiar noises, Ahae’s photographs are an invitation to learn once more how to look and listen. The gray wagtail, the water deer, the azure-winged magpie and the black-naped oriole provide a plethora of characters for an open-air theater. Under the dome of the changing skies, nature is a breviary whose alphabet is written in the fleeting impressions captured by the photographer in every moment.

AHAE was born in 1941 in Kyoto, Japan, where his family had been relocated during the period of Japanese colonization of Korea. He returned to live in his home country, in the south of the Korean peninsula, at the end of the Second World War. As a boy, he began his artistic education in drawing and painting and soon after moved on to sculpture, as well as the art of mask making. He also practices martial arts and holds a seventh dan black belt in Taekwondo. In the 1970s, Ahae fell in love with photography. It was then that he started taking photos and collecting cameras.

But Ahae is not just a photographer. In the past twenty years, he has sought out suitable land where he can put into practice his organic lifestyle concept, focusing on the interconnection between preservation of nature and organic farming. Holder of thousands of patents and trademarks, and winner of several prizes for his inventions, Ahae supervises two organic tea plantations in South Korea that have USDA 100% organic certification and is chairman of the board of 123 Farm, the largest organic lavender farm in southern California.

Two years ago, Ahae embarked on a singularly unique project: to take all his photos from the very same window in his studio. He is to be found at his window every day, come rain or shine, recording every natural feature and scene that catches his eye. Ahae takes an average of 2,000 to 4,000 photographs a day. Producing one million photographs in two years through just one window—a project that nobody had ever done or even attempted before. Ahae uses no artificial lighting, staging or post-production, and this is what makes his project even more extraordinary.

Capturing, as he does, the passing of time and the beauty of the nature surrounding him, the message Ahae broadcasts to the world as he exhibits his photographs comes through loud and clear: open your eyes, see the natural world around you, and do whatever you can to protect it before it is too late. Through these photographic works we see not only the artist, but also the naturalist. Above all, we see a man who sees life and a man who wants us to see that life as well.

From April 2011 in New York to June 2012 at the Jardin des Tuileries, with interim shows in London, Moscow and Venice, Ahae has presented his works to as wide an audience as possible in order to disseminate his philosophy. In 2013, his photographs will be on view at the Orangerie in Versailles and in London.