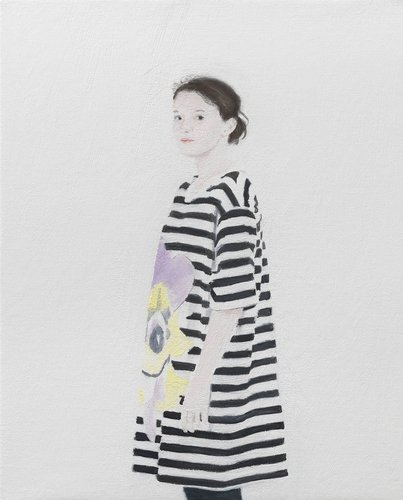 OPEN TO THE PUBLIC SEPTEMBER 7 – OCTOBER 6

‘Since the mid-1990s, Alessandro Raho has been advancing and refining a manner of figurative painting in which the sentience of human presences synonymous with a profound, existential and spiritual sense of being…The figures in his portraits possess the sense of having been re-born- as though cleansed beyond death -or of being seen as platonically ‘realised’, beyond the less substantial shadow versions of themselves that go about their terrestrial business.’

This is Alessandro Raho’s second solo show at Alison Jacques Gallery. The subjects he depicts- whether self- portraits, friends or family -are presented in pared down form: each figure centred and isolated on a monochrome ground. Raho’s use of harsh, artificial, frontal lighting in studio photoshoots is carried through to the look of his canvases. The patterned or blocked colour of his subjects’ clothing deliberately contrasts with the reoccurring white or pastel tones of his backgrounds. This attention to abstract composition might objectify the sitters, if it wasn’t for Raho’s ability to render the subtlest traces of their mood in the direction of a gaze, or the slight up or downward curve of a person’s mouth. His figures are presented with an unapologetic frontality, free from context or narrative, so as to make the subjects’ straightforward presence tangible.

Whilst the portraits look to be of the ‘everyday’, and indeed many of Raho’s paintings show sitters in their own clothes, he has increasingly come to select what they wear for the pictures. By controlling this element, the artist can both source contemporary fashion and photography and experiment with incorporating paintings within paintings. Lizzy (2011), a girl in a top that through Raho’s translation resembles a Mary Heilmann abstract oil painting, holds an assertive pose that nevertheless appears somewhat tentatively borrowed from fashion magazine pages. In two portraits of Jessica (both 2012), Raho has dressed his model in a T-shirt reproduction of a Warhol Marilyn and in a top with a kitsch, 1980s imitation of a Pollock splash, finding new ways of assimilating the art historical canon into his own language of painting. These are not academic games with history, however. Raho is fascinated by the challenges of populism: Jessica (2011) gazes into the deep distance, at odds with the Mickey Mouse cartoon on her chest, and Adham (2011) has an understated, melancholic presence that contrasts with the pop iconic I Love NY T-Shirt.

An important subject in this exhibition was a defining figure in Raho’s artistic career- his tutor at Goldsmiths College in the early ’90s, the artist Michael Craig-Martin. Raho portrays his mentor in his own clothes, which are entirely black, with his hands in his pockets. His gaze is informal but piercingly engaged. In a pose that couldn’t contrast more, the professional dancer Ben (2012) holds a contemporary dance position that sees all of his limbs fully extended and poised, so as to quarter the canvas. Ben- who is not so much wearing a painting as having become one himself  -is clad in a white unitard with a prominent black square, as though Malevich’s Black Square (1915), has been set in motion.