As I rushed through Gary Winogrand’s byzantine retrospective at the Metropolitan Museum of Art for the second time, I wondered if my current way of viewing was not actually the best way of engaging the show. The first time, I went slow, I was deliberate and studious: noting and cataloguing as many of (what I believed to be) the details, patterns, and rhythms of the show as I could, as if they were portents to some future understanding, only accessibly after a latter period monkish and solitary reflection. Not this time. Now, I was rushing, careening headlong and headfirst through this cornucopia of pictures, as if I were Winogrand himself, negotiating the cars and waves of people in midtown, dodging midday traffic, attempting to capture the hectic and unstoppable force of human life and preserve it in another medium. Ironically, its size notwithstanding, the show was not all that hard to hustle though. The exhibit is large without being particularly overwhelming. It is a relief that the near 300 photographs are framed simply and minimally, with unobtrusive captions and only a few blocks of explanatory text per room. However, it must be said that the rooms themselves are rather small and constricted; the show might have looked better in the airy, expansive rooms of MOMA. 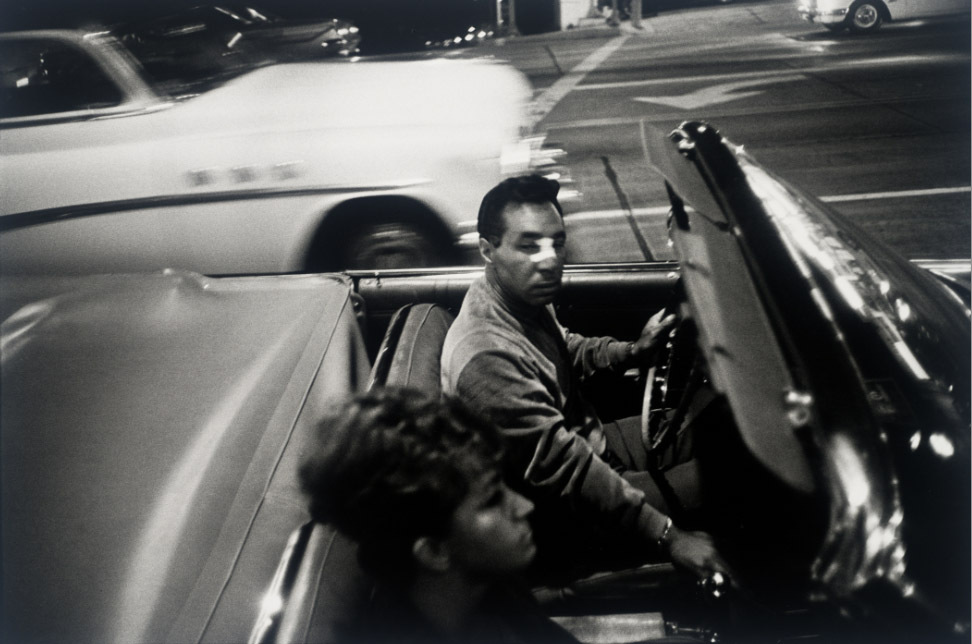 By the end of Gary Winogrand’s regrettably truncated life (he died aged 56) it could be said that he was truly a photographer. Or, rather, it could be said that he was only a photographer; all he did was take pictures. He didn’t edit them; he didn’t even bother to develop or print them. But by God he was going to take them, leaving over 6,000 roles of film on which he had not even laid eyes. Most of these were taken in Los Angeles – he haunted the urban deserts of Santa Monica and Venice, seeing the crowds in an altogether different and, sometimes, more ominous light. Even though individuals were prominently featured, they almost always seemed enmeshed in the fabric of life and more importantly, they existed in relation to other people. Mechanically, this was one of the distinct advantages of using the wide-angle lens of which Winogrand was so fond: you could capture not only more objects and more people, but also more of their variously relatable and stunning interactions. Placing subjects in this direct and purposeful context was possibly lost, for any number of reasons, when Winogrand decamped to the West Coast. His subjects look more bedraggled and more importantly, atomized, like thread dangling of from the frayed edge of a quilt, the deposited remains at the edge of the west. 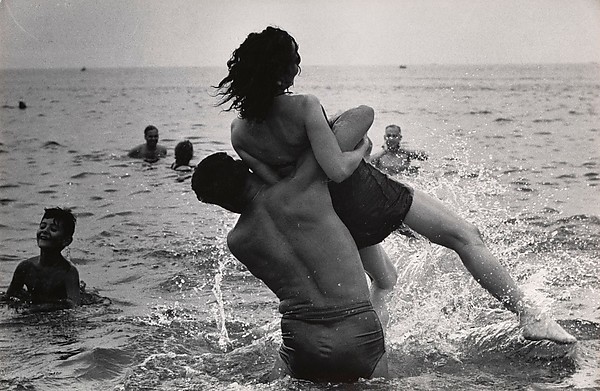 The famous-photographer critic John Szarkowski probably spoke for a party larger than one when he said that Winogrand’s production during the later years had not just been a case of carelessness or delcine, but one of an over-indulgence that bordered on fulsome. Ironically, it was Szarkowski who was, and remained for many years, the most vocal of Winograndians. Most importantly, it was Szarkowski whom curated the path-breaking and now canonical “New Documents Show” which included the seemingly disparate work of Winogrand, Lee Friedlander, and Diane Arbus. The ‘Documents’ show was an antidote as well as a retort to the boosterish and ‘life-affirming’ photojournalism of Life magazine and its cohorts, which came to an apotheosis during Edward Steichen’s 1955 “The Family of Man” (in which Winogrand made a minor appearance, among 273 other photographers). W.H. Auden, once famously said that poetry does nothing. Winogrand, consciously or not, mimicked this point in his response to the ‘Family of Man’ show. He said that photography does nothing; or rather it doesn’t change anything. The photographer’s should observe and attempt to see things as they really are. 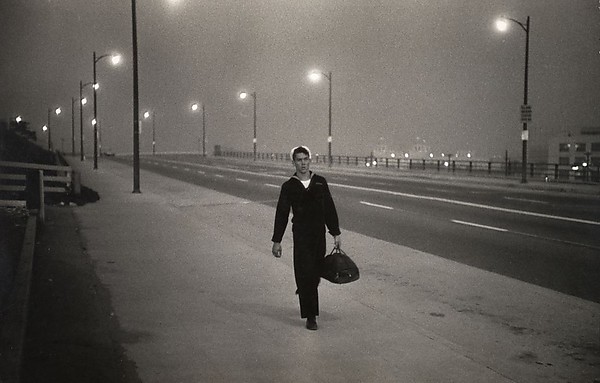 Part of this retrospective’s purpose is a response to Szarkowski dismissal of post-1970s Winogrand. Much of the material culled for this show, which was originally assembled by San Francisco Museum of Modern Art, is from the this later period. Nearly half of the work has never been seen before, not least by Winogrand himself. It is openly admitted by Leo Rubinfien, the curatorial force behind this current exhibit, that the later years were something less than spectacular. There are still golden nuggets, but one must put in the hard work, go pan and sift through the river until striking it rich. However, there is something of a catch to this admission, a proviso from which one does not very easily dissent. It may be that Winogrand declined, but this was in part due to the decline of something, something which he held very dear: his subject, namely America. Winogrand did more than just capture interesting scenes. He was more than just a photojournalist. In fact, he specifically rebuked the confines placed on him by the ever-increasing list of editorial directors and magazine editors who fed and clothed him during the 1950s and early 60s. Instead he sought out the work of photographers like Walker Evans, who not only tried to find the moment of truth behind a photograph, but also the gap behind the truth of the picture and the reality of what was being captured. 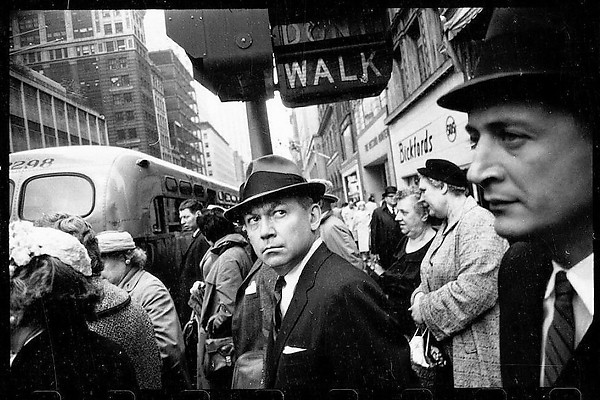 Winogrand was born to Jewish, Eastern European immigrants in the Bronx in the year 1928. He went to local public schools and briefly studied at both Columbia and City College before beginning his career as a photojournalist and commercial photographer (he famously shocked the creative force behind Harper’s Baazar, Alexey Brodovitch by releasing hundreds of loose prints on and around his desk when applied for work- he got the job anyway). As a young man from the Bronx, he was drawn like a moth to the light and vitality of midtown.

Some of his best work is from these years. He traipsed around Manhattan collecting a menagerie of wonderful and enduring pictures: bears, politicians (he had a particular interest in the young Richard Nixon), and beautiful women at nightclubs, in the park, in elevators. He would use assignments personally; a political rally, the World’s Fair, the Bronx Zoo. This is only to name a fraction of his New York City territories. Winogrand was always on the hunt. Seeking out subjects and themes, he was lucky that he started shooting when he did. The tumult of the 1960’s allowed him to draw out the contradictions in American life. We see hippies next to stockbrokers in Central Park, tourists meandering around Dealey Plaza, taking in the sights, like a moribund Disneyland, the simultaneous freedom and isolation of the American plains.

The people in Winogrand’s photographs cascade forward, achieving a beautiful state of disunity and ambiguity, you are not quite sure what they are doing or where they are going next. Its affect is the exact opposite of Henri Cartier-Bresson who attempted to build the perfect apogee or climax—every previous action would beautifully culminate in that one moment—and capture it in a singularity. Winogrand’s unique achievement was rendering, in striking and vivacious terms, the oddness of American life, its freedoms and restrictions, its gorgeous neglect, its wide expanse and unbearably enclosed spaces. In his pictures, the multitudes are both contained and unleashed. 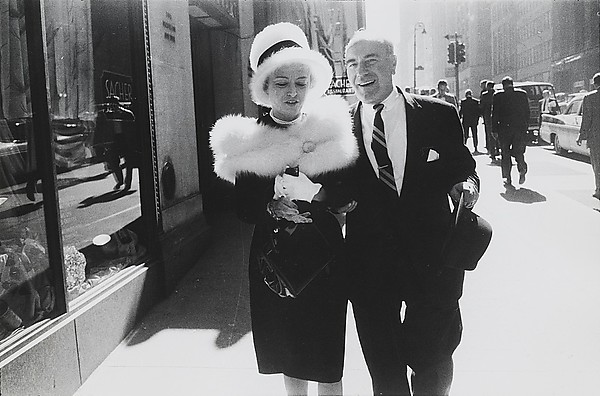 – Article by Julian Cosma for The Untitled Magazine