In Baradaran’s work, Mona Lisa comes to life, raising her hands to don a tricolor head covering. Frenchising Mona Lisa sheds light on the very processes of naturalization and resignification by utilizing the history of Mona Lisa as it has become an icon of the Louvre and the state of France, even though the portrait itself is that of an Italian woman, painted by an Italian artist.

Similarly, the cultures and practices of head coverings are as complex and particular as the periods and places in which they are worn. Bound up with the flux of time and space, their meanings are historical and continuously shifting. Currently in France, the hijab has become a lightning rod about “Frenchness,” a visual threat to the ideals of the secular state. Pursuant to the demands of demographic changes, politicians from the right and the left have been engaging in argument, castigating an interpretation of Islamic practice while religious underpinnings of Western secularism go unacknowledged and undisputed.

Augmented Reality presupposes significant conceptual shifts, as it expands our definitions of ownership and trespassing while triggering dialog about a new medium for interactive installations. Frenchising Mona Lisa raises questions about curatorial control of what is seen in a museum as the alternative (augmented) experience of the Mona Lisa interferes with da Vinci’s original work and injects itself into the Louvre’s presentation of the painting in situ in the Salle des États.

Beginning on January 27, 2011, Baradaran’s channel is viewable by downloading the application Junaio available for free on any Smartphone Appstore. In order to watch the Mona Lisa come to life, users must choose the channel Frenchising Mona Lisa, and point their smartphone camera at an image of the Mona Lisa, whether inside the Louvre or in front of any of its reproductions anywhere in the world.

At the same moment in New York, Baradaran released the manifesto for FutARism, a movement that seeks to explore the experiential, conceptual and legal shifts suggested by the advent of AR within the modalities of contemporary art.

Amir Baradaran is a New York-based visual and performance artist. Born in Tehran and raised in Montreal, his first sketches took root in his grandfather’s philosophy and the harmony of his mother’s poetry. Baradaran’s artistic practice is marked by a recurring exploration of national identity vis-a-vis the cross-section of race and gender. Recent work includes Transient (2010), a series of video installations in New York City taxis, and The Other Artist Is Present (2010), a guerrilla performance in four acts at The Museum of Modern Art. Baradaran’s piece Takeoff (2010) is part of the Augmented Reality exhibition WeARinMoMA (2010), permanently installed in The Museum of Modern Art. 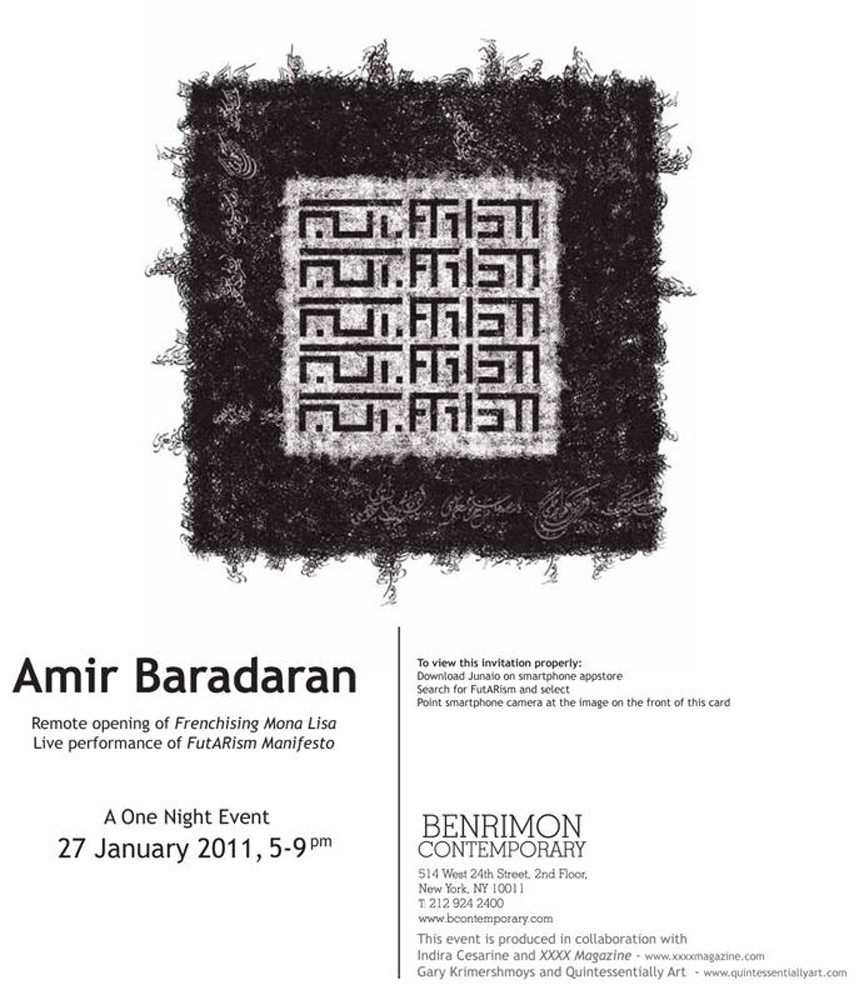