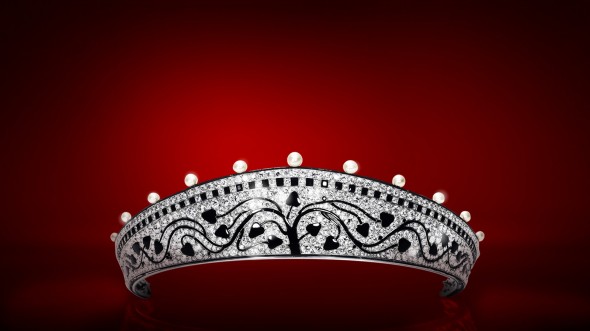 As King Edward VII once said, Cartier has long reigned as, “the jeweler of kings and the king of jewelers.” Presently at the Grand Palais in Paris, some 600 pieces from the royal house of all things glistening are on display in the exhibit, “Cartier: Style and History.”

This stands as the 27th museum exhibition about Cartier in the past quarter century, but as its title conveys, it’s one of the most historically comprehensive. Walking into the gallery is a transporting experience, welcoming visitors with an immediate display of 10 diamond tiaras beneath a sky of images of far-off tropics and Art Deco graphics digitally projected onto the high, vaulted ceilings. Welcome to a world where luxury reigns supreme.

In typical French fashion, luxury here is not about cost or carats but rather about impeccable craftsmanship paired with extraordinary artistic vision that transforms even quotidian trinkets – picture frames, lighters, vanity boxes – into objects of desire (because life is beautiful, so why shouldn’t the mess atop your dresser be, too?). This mindset dates back to 1847 when Louis Cartier first began a watch business in Paris. Function and form were meticulously kept at the highest level, which soon led to the brand’s sole responsibility for the triumph of the wristwatch over the pocket watch. Cartier’s grandson, Louis Francois, took over the business a few decades later and, along with his two brothers, expanded it into the multinational jewelry and watch empire that it is today.

In the mid-twentieth century, Jeanne Toussaint took over as house creative director and popularized Cartier’s synonymy with the panther – a symbol of independence, free-thinking and femininity. However, this particular exhibit focuses more narrowly on the legacy of Louis Francois and his conversion from the more decorative Art Nouveau style to the more streamlined, sleek style moderne. The animals are kept to a minimum in these display cases in lieu of tasteful opulence.

The last piece of the exhibition is perhaps the most iconic: a brooch of a diamond panther sitting atop a cabochon sapphire ball, worn by Wallis Simpson after her marriage to Prince Edward, Duke of Windsor, in 1937. More than 152 carats, the piece is near otherworldly in its lavishness yet a perfect representation of all Cartier stands for: making the simple – a cat lounging on a ball – breathtaking.