On June 6th, the New York fashion crowd came out to admire and celebrate Karl Lagerfeld and Carine Roitfeld’s collaboration The Little Black Jacket: Chanel’s Classic Revisited.   The event was packed with iconic models including 80’s superstar Linda Evangelista, fashion trendsetters such as Visionaire’s Stephen Gan and of course the entire Roitfeld clan. Julia Roitfeld, who recently gave birth 3 weeks ago, looked stunning and slim (in black of course), with her boyfriend Robert Konjic at her side. Karl Lagerfeld was the star of the evening, with the press crowding around him vying to get interviews and photos.

In the series of stunning black and white images presented at the exhibit, Karl Lagerfeld and Carine Roitfeld took a look at one of Chanel’s most iconic designs. Lagerfeld said after a photo shoot for the book in Paris, “The Chanel jacket has become the symbol of a certain elegance, feminine, with an air of nonchalance, classic and timeless, that is of all times.”  Of course, Lagerfeld is referring to the jacket designed by Coco Chanel, herself; the boxy, tweed, coat with bracelet length sleeves, which has been a staple of actresses, models, and socialites since its creation. The photo shoot for the book took place in Cannes, New York and ended in Paris at the studio 7L. For the project Lagerfeld and Roitfeld gathered together 113 celebrities each wearing a  black jacket styled by Roitfeld to suit the wearer’s individual personality. The black and white photographs, taken by Lagerfeld, feature actors, artists, singers, and musicians, including Sarah Jessica Parker, Georgia May Jagger, Kanye West, Yoko Ono, Claudia Schiffer, Anna Wintour and Kirsten Dunst. Roitfeld even dresses up as Coco, donning the signature jacket, pearls, and straw boater. 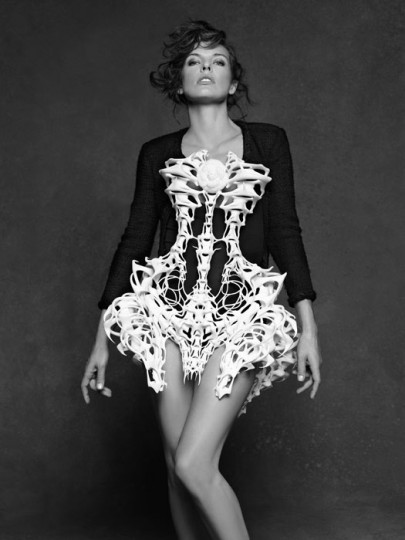 Officially, the book of photographs will be available to the public on August 15, 2012, but for now, is available for pre-order online. The opening for The Little Black Jacket exhibit was held by Chanel in Tokyo from March 24th to April 15th and now Lagerfeld and Roitfeld will bring the photographs to SoHo at 118 Wooster St, exhibiting them in New York for one week between June 8 and 15.  For those who miss out on this brief showcase in downtown Manhattan, there’s no need to wait until September to get your hands on the photos, all 113 images in the collection are already available for perusal online. 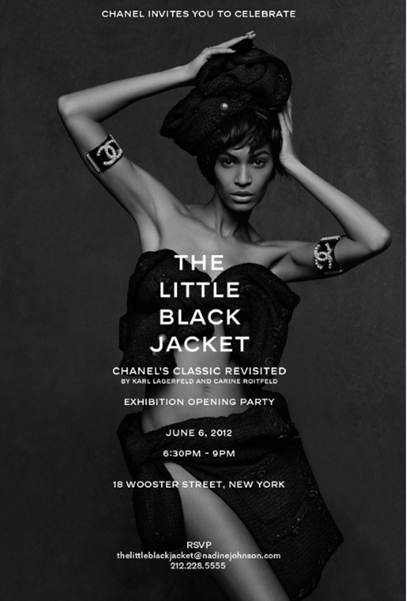