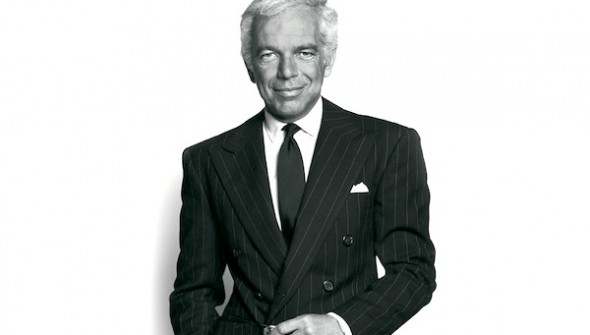 Ralph Lifshitz, the man who ultimately became the iconic American designer Ralph Lauren, was born in New York City on October 14th, 1939. His life’s work led to the establishment of one of the most recognized brands in the world; an esteemed and influential powerhouse that demands respect from established competitors and sets standards for incoming players. We live our lives in his designs, and for that, we salute him.

Raised by Belarusian immigrants, Ralph Lifshitz resided in the Bronx and attended Baruch College where he majored in business. His passion for fashion, however, had already blossomed by the time he finished high school as he was often seen selling ties to his fellow classmates, and himself, preferred to dress to impress. He admired prominent and stylish men who were as powerful as they were influential, and Lifshitz eagerly sought to become one of them. He probably realized that his name would become the center of his identity; still, at 16, he and his brother changed theirs from Lifshitz to Lauren and never looked back.

Although Lauren only completed two years of his college education, the experience clearly proved useful. The Ralph Lauren Corporation is currently a global multimillion-dollar enterprise spreading across several verticals that include fashion, fragrances, and home décor. After dropping out, Lauren had a stint in the United States Army, held a sales position at Brooks Brothers, and worked at a tie company by the time he was 26 years old. While at his last job, he designed a tie inspired by fashions then popular in Europe, but his employer rejected the proposal.

Motivated and determined to see his concepts come to fruition, Lauren decided to start his own company, turning rags into beautiful neckties and selling them to businesses around New York. His efforts paid off when his creations captured the attention of Neiman Marcus. One thing led to another and Lauren opened a store where he sold his own designs that included ties in 1967. This was the birth of his now iconic Polo label, and by 1971, he opened another store in Beverly Hill’s world-famous Rodeo Drive.

Soon celebrity clientele became well aware of who Ralph Lauren was, and what he was capable of designing. Commissions for movies started flowing in, with film and television icons, as well other trend-setters, sported his creations. In 1984, Lauren turned Madison Avenue’s Rhinelander Mansion into his first flagship store, and by 1997, what started off as a small, necktie-crafting business venture became a publicly traded company we all know as the Ralph Lauren Corporation.

Independent of the fact that Ralph Lauren is the offspring of Belarusian parents, his designs encapsulate the freedom and spirit that is strictly American. When we think of his clothes, we often envision models suspended in graceful poses frolicking on fertile grasslands as wild horses run across the background, or images of refined folk dressed in Polo shirts and equestrian inspired boots and blazers gathered around a campfire. Of course, his fashion empire features a multitude of lines ranging from casual to high fashion, but the essence of his brand is heavily Americana in its basic nature.

Somehow, he is able to bond his identity to the very fabric that our culture is weaved of and still manage to positively impact other cultures. It may, for instance, be the very reason French President Nicolas Sarkozy declared Ralph Lauren Chevalier de la Legion d’honneur in 2010, although, this is personal speculation at work. Regardless, Lauren was also awarded the James Smithson Bicentennial Medal in 2014, so clearly his impact is something that will be remembered and respected for many years to come.

It’s easy to imagine fashion students of the future studying design, taking business classes, and embarking on their own paths to greatness because of something that was inspired by Ralph Lauren. But today, we would like to take a moment and wish him a Happy 75th Birthday.

– Liz Belilovskaya for The Untitled Magazine