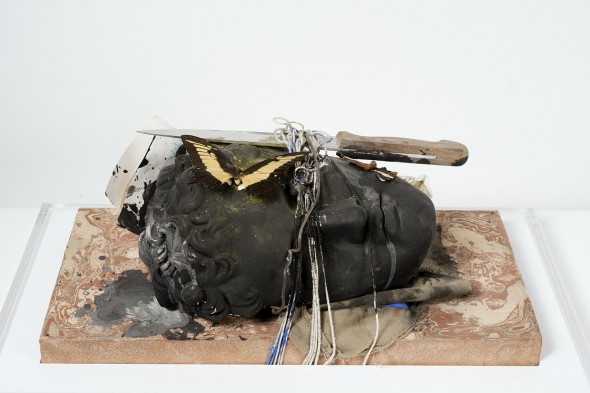 Eminent and iconoclastic Italian artist Claudio Parmiggiani is currently having his first exhibition in the United States since 1986 at Bortolami Gallery in New York. This show brings together new and historical works across a variety of media that exemplify Parmiggiani’s fundamental concerns with memory, absence, fragmentation, solitude, silence and uncertainty.

Parmiggiani’s sculptural installations and interventions are simple gestures with profound resonance; he has been associated with both the Arte Povera and Conceptual Art movements, although he resists firm connection to either. Among the works in the exhibition is a sixteenth-century bronze church bell hung from the ceiling by its tongue (as if choked, unable to produce sound); a series of sculptural assemblages from the 1970s consisting of antique plaster heads coupled with books, butterflies and birds nests; and 365 loaves of bread cast in iron and scattered across the floor, symbolizing not only essential nourishment but also invoking the dichotomy of the ephemeral and the eternal.

At the center of the exhibition is a series of Delocazione, Italian for de-location. The largest of these depicts the impression of the burnt remains of a library while others represent windows, veils, and picture frames. A central thematic and visual motif of his oeuvre, Parmiggiani chanced upon this working method in 1970, when at the Galleria Civica di Modena, he chose to exhibit in a room that normally serves as a storage unit. Objects had been left leaning against the walls and when he removed them he discovered their imprints in dust. He then decided to immortalize these silhouettes using smoke.

In order to create his Delocazione, Parmiggiani sets various objects on fire with combustion of tires. When the objects are removed, what remains are their negative outlines in soot thus revealing their trace and memory.