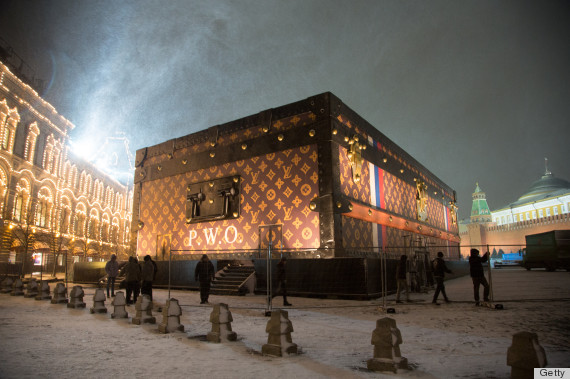 In Moscow, Louis Vuitton have sparked controversy after the forced removal of their enormous LV trunk from the Red Square. Opened to commemorate the 120th anniversary of the house’s flagship boutique at GUM in the Red Square, the colossal trunk houses the exhibition L’Ame du Voyage (The Soul of Travel), boasting 25 rare and historic LV pieces.

Despite its short six-week run time, the exhibition has been ordered to be removed from the Red Square. According to spectators, some Muscovites were not too pleased about the thirty-foot-tall, hundred-foot-long Louis Vuitton pavilion. The uproar was apparently formed due to the trunk’s obstruction of landmark sites such as Lenin’s Tomb, also closing out the panoramas of the Kremlin and the candy cane-colored domes of St. Basil’s Cathedral. “Considering the view of some of the public, and the fact that the pavilion’s size has surpassed the agreed parameters, we told Louis Vuitton about the need to immediately dismantle the pavilion,” GUM said on its website.

The French luxury brand unveiled the display a little more than ten days ago, just outside GUM, the 19th century department store that faces the square and houses the Moscow LV flagship. The trunk was considered a hindrance to the upcoming New Year’s celebrations; Muscovites usually gather in the square for fireworks and drinking at midnight and were not happy about the prospects of sharing the space with a massive suitcase.