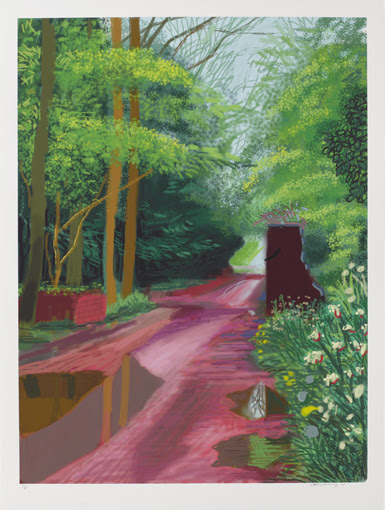 David Hockney
The Arrival of Spring

New York—Pace is honored to present David Hockney: The Arrival of Spring, which features recent prints, drawings and video by one of the most important and celebrated living artists in the world. This is the first of two Hockney exhibitions at Pace this fall. A catalog featuring two personal statements written by the artist accompanies the exhibition. The public is invited to attend an opening reception on Thursday, September 4, 6–8 PM.

The Arrival of Spring includes iPad prints, charcoal drawings, and a video installation depicting the gradual change from winter to spring in Woldgate, East Yorkshire. Born and raised nearby, Hockney first became acquainted with Woldgate around the age of fifteen, while working on a farm during the summers of 1952 and 1953. After spending decades living and working in Los Angeles, the artist settled in Yorkshire once more in 1999, rekindling his interest in its landscape.

A series of iPad drawings printed on paper titled The Arrival of Spring in Woldgate, East Yorkshire in 2011 (twenty eleven) will be on view. Each work depicts a specific day between January 1 and May 31, 2011, steadily revealing the progression of the seasons. In his statement, Hockney remarks, “These were drawn knowing they would be printed a certain size. The mark making is very varied for this reason.”

Hockney first bought an iPad in 2010 and had been drawing on the device for six months before starting his Arrival of Spring series. The prints were introduced to the public at the Royal Academy of Art’s exhibition, A Bigger Picture, in 2012, which subsequently traveled to the Guggenheim Bilbao and the Ludwig Museum, Cologne. As the first comprehensive survey of Hockney’s work since 2002, A Bigger Picture was London’s most attended exhibition of the year. iPad prints were recently presented in David Hockney: A Bigger Exhibition at the de Young Museum in San Francisco from October 26, 2013 to January 20, 2014.

Hockney’s series of charcoal drawings, Woldgate, The Arrival of Spring in 2013 (twenty thirteen), first presented in the de Young Museum’s exhibition, depict five scenes of Woldgate drawn on separate occasions, from January to May of 2013. Describing the process of these drawings in his statement, Hockney writes, “They are five separate views of Woldgate, and with each one I had to wait for the changes to happen. Some were too close to the previous ones and I realized I was being impatient. I had to wait for a bigger change. I thought it was an exciting thing to do. It made me look much harder at what I was drawing.”

Pace’s exhibition will also feature the video installation Woldgate Woods, November 26th(2010), which was filmed with nine cameras attached to a moving SUV, exhibited across a multi-screen grid. Hockney’s interest in video began in 2010, when he realized that multiple, smaller cameras could create a bigger, more complete picture than the conventional, single, large camera. Hockney’s video works have been the subject of recent museum exhibitions worldwide. In 2013, the Whitney Museum of American Art mounted The Jugglers, June 24th 2012, the first of the artist’s video installation to be exhibited in the U.S. This past year, the Los Angeles County Museum of Art mounted two of the artist’s monumental, eighteen-screen video installations: Seven Yorkshire Landscape Videos, 2011 and The Jugglers, June 24th 2012. Hockney’s videos, filmed in his Bridlington studio and nearby East Yorkshire countryside, have also been included A Bigger Picture at the Royal Academy of Art and A Bigger Exhibition at the de Young Museum.

David Hockney (b. 1937, Bradford, England) has produced some of the most recognizable and iconic images of the last half century. His ambitious pursuits have stretched across a vast range of media, from photographic collages to full-scale opera stagings, fax drawings to an intensive art historical study of the optical devices of Old Masters. Hockney has produced work in almost every media, from painting and drawing to photography and printmaking, working with such cutting-edge technology as fax machines, laser photocopiers, computers, and, most recently, video, iPhone and iPad. Hockney has participated in nearly 400 solo exhibitions since 1963.

Hockney received the gold medal for his year at London’s Royal College of Art in 1962, the first of numerous accolades throughout his career. Hockney had his first one-man show at the age of 26, and a 1970 exhibition at the Whitechapel Gallery in London marked the first of several major retrospectives worldwide. In 2012, Hockney was appointed a member of the Order of Merit by Queen Elizabeth II.

Hockney began painting the Yorkshire countryside in 2005, sparking what Lawrence Weschler has called, “the fiercest, most joyous, most sustained, and most prolific bout of painting of his entire career…” His paintings of the town of Bridlington were first shown at the Kunsthalle Würth in David Hockney: Just Nature (2009), and subsequently at Pace Gallery in David Hockney: Paintings 2006 – 2009, the artist’s first New York exhibition of new work in twelve years. More recently, Hockney’s new work has been the subject of the sweeping retrospective, David Hockney: A Bigger Picture at the Royal Academy of Art, London, which traveled to the Guggenheim Bilbao, Museum Ludwig, Cologne (2012-2013) and David Hockney: A Bigger Exhibition at the de Young Museum, San Francisco (2013-14).