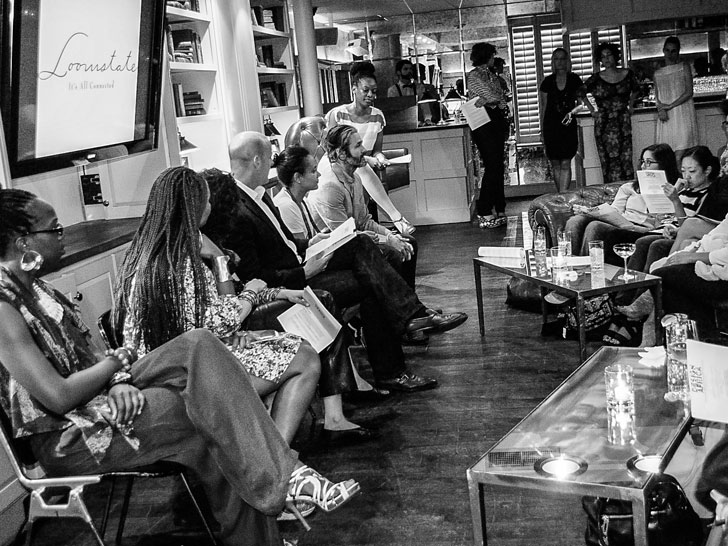 The Soho House, the private member’s hotel and club in the meatpacking district, recently hosted a panel discussion called “Design Africa,” which discussed the future of Africa in terms of fashion design, industry, and the growing luxury consumer market. The discussion came just days after the article “Rebranding Africa” by Suzy Menkes was published in the International Herald Tribune, a lead in to this year’s upcoming IHT luxury conference that will touch on the topics of The Promise of Africa and The Power of the Mediterranean. The panel at the Soho House also coincides with the release of L’Uomo Vogue’s May/June issue dedicated to all things African.  The panel consisted of Loomstate’s Scott Hahn, Bantu Swimwear founder Yodit Eklund, SUNO’s Nadiyah Spencer, and Enyinne Owunwanne of Heritage1960, with guests such as Edun founder, and wife of Bono, Ali Hewson, Julie Gilhart, and Barneys’s new senior fashion director Tomoko Ogura in attendance.

The group touched on many subjects concerning the fashionable future of Africa, including whether the continent was set to becomes “the next China,” known for their competitive production prices, or the “the next Italy,” known for their high-quality craftsmanship.  Scott Hahn suggested that perhaps they were going about their discussion of Africa all wrong, saying, “Africa is never going to become a new [source for] luxury, but specific places will.”

Another important talking point from the event was the discussion of government sponsorship of the luxury market.  Members of the discussion panel pointed to this as the source of much of France and Italy’s “prestige value” when it comes to luxury goods.  However, when raised as a possibility for Africa, many found the idea ludicrous, specifically Yodit Eklund, who produces her swimwear in Ethiopia, said, “It’s not the right place to have this campaign — people are hungry.”  While Nadiyah Spencer, who oversees all of SUNO’s production in Kenya, firmly disagreed, “The backdrop of socioeconomic policy shouldn’t say you can’t make a product in Kenya and charge for it,”

Bridget Russo, the producer of the event and founder of Passion Projects, brought up the timely issue of the fashion-friendly trade policy set to expire in September. The policy allows brands producing their designs in Africa to import fancy, foreign fabrics to underdeveloped areas of Africa without having to pay duty on the goods.  This, theoretically, makes socio-economically unstable locations attractive to big businesses because of the tax breaks, bringing money and work into the villages.  The approaching expiration of the policy has already seen clothing industries begin to reallocate their business elsewhere.  However, designer of Edun, Ricky Hendry, wondered if the lapse of this policy might actually lead cheap brands taking their production elsewhere, allowing for a resurgence in the luxury department.

No matter what Africa’s fashion future may hold, this concerted effort by the fashion industry to economically shape and understand the continent can only lead to more interest and attention being paid to the issues.  Russo plans on holding similar panel discussions this year in London, Capetown, and an event at Miami Art Basel.