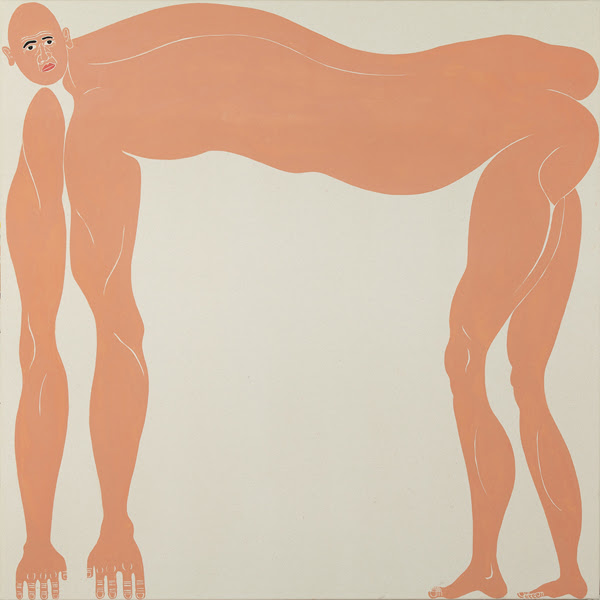 The Hole gallery in NYC will present a group exhibition, Early Man, at the gallery opening this Thursday, November 13th. Taking early art making (as in Upper Paleolithic) as a jumping off point, artists in this show use various strategies to create meaning, from the barely rudimentary to the highly sophisticated.

The first artworks made by humans exist in a context-less void, where artistic intention is indeterminate; they are rich for speculation, perplexing and tantalizing. To early art experts, even, interpretation is baffled as many readings all present themselves as equally valid. Cave paintings could have religious intent, they could have narrative or storytelling intent, they could be fanciful and decorative. The earliest figurative sculptures—the various Venuses—are interpreted alternately as religious artifacts, early porn, or the first female self-portraits, all with a vast difference in significance. Perhaps one of the most interesting interpretations of early art is that it was created for the process, and the end result is incidental.

Looking at artworks across time negates all our traditional tools for art analysis and we are drawn most to this elusive “why”. It is ubiquitous for young artists to brood over the question of “why put another painting into the world” and such questions lead ultimately to “what is art for anyway”; a question for which people often look to earliest art-making for an answer. The evolutionary birth of the human impulse to make art seems to be a good place to figure out why we are all super into this.

The accepted story is that art went from being functional craft to being capital-A Art around the Renaissance, so it would be impossible for us to look at prehistoric art properly from our historical vantage point. Symbolic practicality seems to be our cultural knee-jerk; but is “art for art’s sake” so impossible to imagine for Early Man? The patterns of petroglyphs and pictograms seem to prove the pleasure of iteration early on. The accomplishment of verisimilitude in 30,000-year-old animal paintings in Chauvet or Lascaux seems to evince the simple enjoyment of rendering accurately.

Other than real-world early art impulses, the stock character of the Cave Man holds a lot of appeal for young artists; the idea that art was urgent, crucial, important enough to make time for during a strenuous day of hunting or running from mammoths or whatever. Maybe artists are interested in the idea of a cultivated ignorance or the appearance of uncivilized behavior; maybe artists also like the fantasy that their work will be something generations will puzzle over in the future, or are just into the idea of being willfully confusing, their intentions unexplained, the way a 23,000 year old Baton de Commandement could be a spear thrower or a midwife calendar or a dress fastener or an arrow straightener.

The Hole curator for the show says “I think I was originally drawn to making a thematic show around these ideas after seeing a lot of aggressive, raw and rugged painting over the past year, made even with the artist’s hands, really getting in there and seeking what you could call gymnastic authenticity. I saw these paintings as like literally wrestling meaningfulness and cramming it into an artwork.”

Getting to the bottom of art theory can sometimes seem as mind-numbingly difficult as trying to invent fire, but this show instead will try to let it all evolve naturally for the viewer, the rawness and honesty of the work an attempt to generate some kind of new spark for the future.