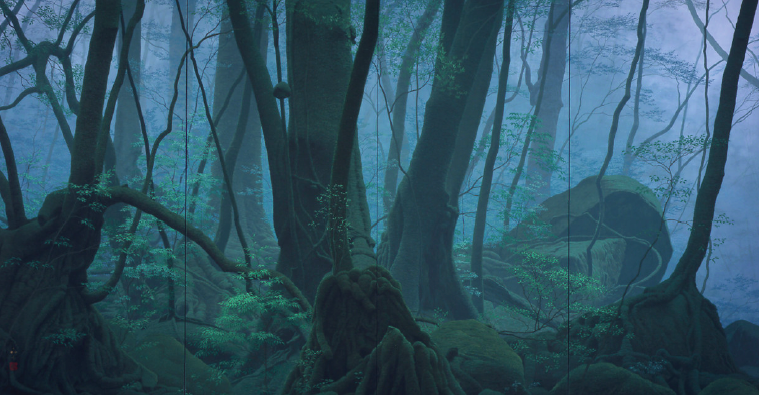 Dillion Gallery is pleased to announce an exhibition of contemporary Japanese screens that emphasize the passage from antique Edo period classics through digital technology and video making of the 21st century. In an effort to show the comparative and disparate styles of screen making, and the contemporary applications currently in use, this exhibition brings together an elegant variety of techniques beginning with two remarkable Edo period 6 fold narrative screens celebrating the “Hie Sanno Matsuri “ festival.

Edo – Video is comprised of 9 artists that have excelled in this specific genre. The earliest screens, of unknown origin but dating from c.1700, display the traditional festival that took place every April, when large portable shrines were loaded onto boats and taken back to the village. This early narrative esthetic is updated in the art of Masatake Kouzaki, a contemporary artist who employs the traditional technique and clouds of gold used in the Edo period, to portray a very different world of satellites, space ships and genetically engineered animals. Keizaboro Okamura has interpreted Edo period screens using monumental scorched cedar panels incised with depictions of colossal semi- mythological creatures.

Norihiko Saito, an established master of shoji screen making, has created a small treasure of the sakura (cherry blossom) in its most abstracted state. The use of abstraction in the screen making process is highlighted by a 3 panel screen painted by Makoto Fujimura, titled “Emily Dickenson’s Trinity”. In place of shoji screens, Fujimura applies pigment and gold leaf directly to Belgian linen in the quick motion of action painting that weave towards delicate spheres of gold leaf. Further enriching the category, Yuzo Ono defines the limits of ground pigment by the artful reduction of ground malachite layered onto the surface of gleaming sheets of aluminum. Yuji Sasaki, noted as a landscape artist, presents his own style of seemingly abstract landscape with skilled technique and saturated color that result in a visual Haiku translated to a mini screen. Kazuyuki Futagawa has provided a master screen, “ Blue Green trees “, keeping closely to the prescribed technical aspects of a Japanese screen by using “Iwaenogu” – Japanese mineral pigments. Ultimately, the inclusion of a video creation by Mami Kosemura, “Flowering plants”, offers a technically masterful 3 part video installation based on screen tradition that guides the viewer towards a new frontier in screen making with surprising yet subtle rhythmic movement.

This exhibition sets out to examine and redefine a centuries old art form and how it survives and inspires in our current times. The artists are included in museum collections in Japan as well as the United States and are all highly regarded in their fields.