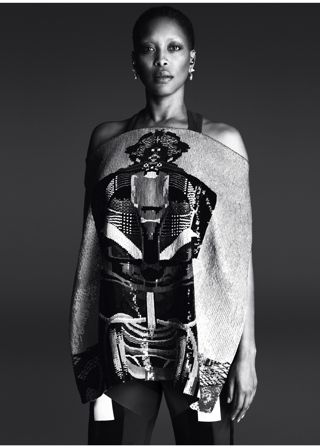 Designer and creative director of Givenchy, Riccardo Tisci, posted a photo on Instagram of Erykah Badu with the message “Welcome to The Gang.” Moments later, Tisci posted another photo of the R&B singer announcing that she will be the face of the Givenchy Spring 2014 Collection.

Tisci is known for having one of the sharpest casting eyes in the fashion industry – casting women that express strength and individualism in his campaigns. Featuring Badu as the face of Givenchy’s Spring 2014 collection may attract attention, but should come as no surprise considering the campaign is following a season that showed an increase in the use of models of color on the runway. The industry is taking note of the changing times and incorporating women of varying race in campaigns and runway shows, gaining respect from renowned models such as Iman and Tyra Banks. Givenchy has been and continues to be one of the leading forces behind the gentrification of the fashion industry – back in 2010, their runway held seventeen colored models.

The Mert & Marcus-shot campaign will be available soon.

MICHAEL KORS AND GWYNETH PALTROW TEAM UP FOR HOLIDAY COLLECTION