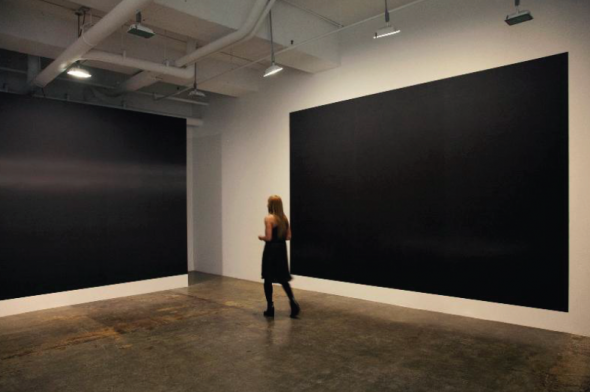 Mike Weiss Gallery is pleased to present Navigator by Eugene Lemay.  For his first solo exhibition at the gallery, Lemay presents an installation of large-scale, atmospheric tableaus composed of layers of digitally altered Hebrew text.  Nearly black at first glance, the tapestry of indiscernible marks conjures notions of remembrance as ethereal terrains and undulating mountains reveal themselves in fictional nightscapes. Measuring up to 20 feet in length, the works are adhered directly onto the gallery walls, enveloping the viewer’s entire field of vision and inviting an experience of the sublime.

The title of the show is derived from Lemay’s time spent as a navigator in the Israeli Army. Guided by the recollection of studied aerial strips while engulfed in utter darkness, the role of the navigator is to plot, ascertain and move on foot through the night. The navigator willfully pushes forward toward a distant horizon in an attempt to mark his position on the earth. Memory is his strongest weapon.

The Hebrew scrawls that thoroughly cover Lemay’s works are from a collection of old handwritten letters never sent to the families of fallen soldiers with whom Lemay served. Revisiting and sharing the letters years after they were written is the artist’s way of making sense out of the darkness. The rich black abstractness of the work is a result of a digitized stratum of marks built up in endless veils, until a haunting, barely perceptible, landscape emerges.

In their monumental scale, the shadowy layers of borderless information engulf the viewers in a manner that emulates the silent, mysterious effect of the night. Like the powerful black hole installations of Lee Bontecou, Lemay’s works become portals into a mesmerizing and unknown space. The massive images printed on several large vertical bands of paper become a physical reference to the aerial strips once used in navigation. The overall effect is one of awe and reflection, where the corporeality of the handwritten word intersects with the cool order of our technological age.

Eugene Lemay (b. 1960, Grand Rapids, MI) is of mixed Lebanese, Syrian and French Canadian heritage. His family converted to Judaism and moved to Israel in 1973, where he spent the rest of his teen years on a kibbutz; he currently lives and works in New Jersey.  A self-taught artist, Lemay has exhibited his works in Holland, Germany, Dubai, and the United States. Lemay recently founded MECA (Middle East Center for the Arts), an exhibition space and residency program where Jewish and Arab artists work and exhibit together.