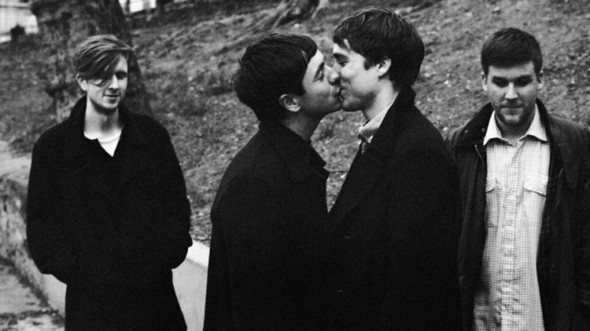 There’s something in Manchester’s soil. The Northern England metropolis has been sprouting pivotal independent bands for decades; The Smiths, Joy Division, Oasis, and The Stone Roses among them. Money might be the next name on that list, though perhaps to the chagrin of front man Jamie Lee.

“None of us are crazy about those bands” Lee said in an interview with The Observer, touching on the geographic identity of the group. But regardless of Lee’s dispassion for post-punk’s Northern glory, he is adamant that Money is in fact a Manchester band. Lee left his native London as a late teen for the city, bringing with him an outsider’s romantic view of a place largely depicted as bleak.

“People here live for different reasons. People do things differently here. I’ve said before that all people in Manchester are symbolically dead…not like that would be a bad thing, but for some reason they’re not solemn, there’s no solemnity about it. They are celebrating the fact that they’ve gone for some reason.”

He goes on to say that Manchester’s imperfections are what make it a sort of paradise, elevating the mundane to a kind of beauty. It’s a heady perspective that is delivered with laughs; Lee has a great sense of humor about himself. But the sincerity of these statements is reinforced when you hear Money for the first time. Touting the instrumental prowess of drummer Will Byron, bassist Scott Beaman, and guitarist Charlie Cocksedge, the band summons miles of sound that could be described as “hymnal pop” or “cathedral folk.”

The words “hymnal” and “cathedral” are not used haphazardly. It’s impossible to ignore the spiritually themed lyrics throughout Money’s music, and even harder to not recognize the transcendent choral melodies so reminiscent of gospel. After reading of their performance in Salford’s Sacred Trinity Church, I began to wonder if I’d breached religious territory. However after noting song titles such as “So Long (God Is Dead)” and reading an interview with Lee via Under The Radar, the Biblical allusion was mitigated:

“I wanted to imbue Manchester and a Britain without religion with a Biblical proportion…to say something about the situation we find ourselves in where we’re godless, or we have a warped spirituality at least. It’s about us having lost our afterlife through our loss of religion. Not really confronting death in any kind of social manner.

Their debut album The Shadow of Heaven proves that Lee is consistent with Lee’s deep thematic narratives. The record is one for the headphones, pairing spare pop rock progressions with sweeping echo and bright guitar fills. It is produced with an admirable amount of restraint, which is essential to its quality since over production could easily take these songs from ethereal ballads to sparkly anthems. Think U2 before they got bad: overproduction ruins everything.

Money is too original sounding to name many influences, but the most starkly apparent is the Scottish group Cocteau Twins. Oddly enough, the group’s own Simon Raymonde was the one who signed Money to Bella Union records, the label representing artists such as Dirty Three and Van Dyke Parks.

I was fortunate enough to catch Money last Wednesday for their CMJ showcase at Pianos. The group sounded even better than their record, Cocksedge proving to be a talented producer as well as guitarist as he played riffs, looped and mixed them right on stage. Lee wailed the entire set, showing us a truly dynamic voice that ranged from smoky vocals to Chris Isaak-like croons.

They played a big chunk of the new album, highlights being “Hold Me Forever” which is a more straightforward track than most of their catalogue. Their songs are often spacious and ethereal, lacking any definitive chorus or verse. “Bluebell Fields” has the band at their most Cocteau Twin-ish while “Who’s Going to Love You Now?” employs a twinkling Telecaster hook that could settle easily into a Fleet Foxes (fellow Bella Union Alumni) song.

For all of Money’s momentum as of late, I suspect we’ll be hearing more from them shortly. Perhaps at the end of that list of Manchester Bands.

– Article by Madison Bloom for The Untitled Magazine.