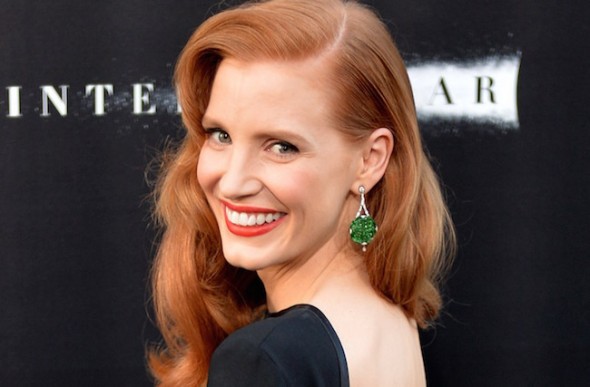 We celebrate the rich and famous for different traits. Some are talented or beautiful to an enviable degree, others make us laugh. We’ve been getting a crop of new faces that have also been celebrated for the idea, or perhaps illusion, that they are just like us, making fart jokes on every late night show or red carpet appearance. But there’s one rare and beautiful attribute that seems to become rarer with time- class. Some would argue that it was left back in the Golden Age with screen legends like Lauren Bacall and Katherine Hepburn. But there’s one actress out there that should be revered for not only having talent and beauty, but the ability to also carry it all with grace and dignity. Jessica Chastain is an actress, an artist, and a true class act—one that’s been years in the making.

Chastain was born Jessica Howard in Sacramento California, to vegan chef Jerri Chastain, and fireman Michael (her stepfather). She was one of five children,  growing up in a middle class neighborhood, where the biggest influence in her life was her grandmother, Marilyn. It was her Nana that took her to a local production of Joseph and the Amazing Technicolor Dreamcoat when she was seven years old. There, she discovered the path she would take. After graduating high school and participating in theater productions with the TheaterWorks group, she auditioned for a little theater school in New York City after a friend recommended that she audition. Chastain was accepted to Julliard’s Drama Division on a scholarship funded by the late alumni Robin Williams. She graduated in 2003 with a BFA, and set out to make a name for herself, a daunting journey that any fellow actors reading this can relate to.  In an interview with Huffington Post, Chastain said that she had difficulty even getting her face in front of casting directors due to her “unconventional” looks. “People didn’t know exactly where to put me,” she said of the casting directors and producers that saw her.

Finally, some one knew what to do with her. In 2004, she got a small role in an episode of ER, followed by a guest spot on the cult hit Veronica Mars. Her intermittent TV career continued with a role on the exceptionally short-lived Law and Order spinoff, Law and Order: Trial by Jury. As she continued to make appearances on TV here and there, she was finally cast in her first feature film in 2008. Jolene, a smaller than small indie ensemble film caught the eye of a few critics, including the New York Observer’s Rex Reed. Reed wrote that “Chastain not only holds her own corner of every scene, she’s the only thing you want to watch.”

Then came 2011— a year that would catapult Chastain from a little known actress to an all out star. In one year alone, she starred in The Tree of Life, Take Shelter (both which premiered at Cannes Film Festival) Coriolanus, The Debt, and The Help, a movie based on the Kathryn Stockett novel of the same name. It was with The Help and her role as Celia, the lovable black sheep of a small Southern town, that landed Chastain her first Oscar nomination for Best Actress in a Supporting Role. Her Oscar night date for the event was, most appropriately, her Nana. While she lost that night to her Help co-star, Octavia Spencer, things only continued to go up from there.

Meanwhile, director Kathryn Bigelow was prepping her follow-up to her Oscar winning film, The Hurt Locker. The film was Zero Dark Thirty, which followed the 10-year man hunt for Osama Bin Laden. Bigelow was looking for an actress with enough strength and vulnerability to play Maya, the woman who headed the operation, when Ralph Fiennes showed her a rough cut of his film Coriolanus, starring Chastain. Bigelow immediately cast her. When Thirty was released in 2012, Chastain was praised by every critic who reviewed the movie. Well, almost every critic. But that didn’t stop her from receiving a Golden Globe win for Best Actress (Drama), and a second consecutive Oscar nomination, this time for Best Actress in a Leading Role.  She’s currently gracing the screen in both Interstellar, Christopher Nolan’s new space exploration epic, and A Most Violent Year, JC Chandor’s crime drama that takes place in New York City, co-starring Julliard alumni, Oscar Isaac.

What makes Chastain stand out is not only how exceedingly gifted she is, or how natural — almost picturesque — her beauty is. It’s the way that she continually handles herself with every ounce of grace and composure, without an ounce of conceit. It’s an art form in itself, one she has seem to perfect even before she hit the big time. Not much about her personal life is known, other than the brief insights she lets the public in on. She’s never spoken a bad word about any of her costars or colleagues. In fact, it’s quite the opposite. She has a Twitter, where she posts updates about her latest films, articles on women in the film industry, and pictures of her adorable three legged dog, Chaplin.

The future seems to hold nothing but great things for this actress. With a diverse slate of upcoming projects, such as Guillermo del Toro’s period horror piece Crimson Peak, Ridley Scott’s space epic The Martian with Matt Damon, and an adaptation of Diane Ackerman’s novel, The Zookeeper’s Wife—there may even be a Marvel movie on the horizon for her. For now, we can enjoy the amazing work she’s already put out, as we wait for the next crop of fine performances from an actress who’s bringing back the class, and making it look good.

– Article by Alanah Rafferty for The Untitled Magazine