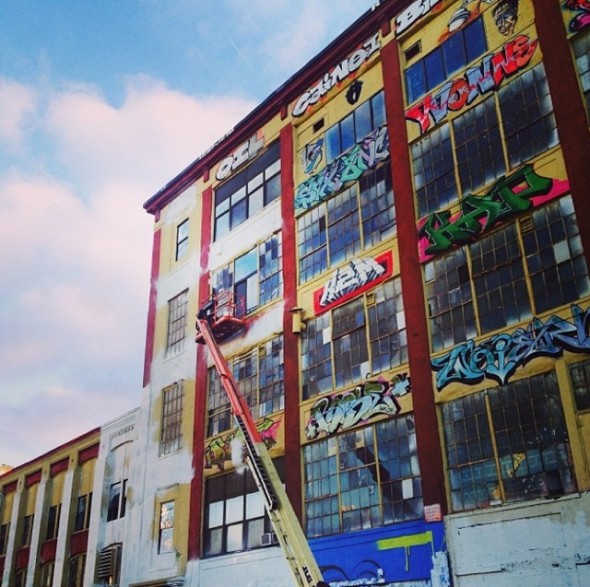 Days after a rally where passionate protesters tried to save the infamous graffiti mecca, 5 Pointz in Long Island City, Queens, the legendary walls were painted over.

Considered the world’s premiere spot for graffiti artists, 5 Pointz Aerosol Art Center is an outdoor exhibition space where aerosol lovers from around the globe make the pilgrimage to make their mark on the walls of the 200,000 square-foot factory building. Under cover of darkness and police protection, the hallowed hub was painted over late Monday night with stark white paint. The building, originally owned by the Wolfoff family, is being transformed into luxury condos. Boasting the City Council’s consent and approval, an enormous amount of white paint is being deployed to cover the long-admired graffiti art and bring the building back to pristine condition.

Beyond the countless vexed street art admirers and the recognized mournful faces of daily commuters, we should really see the bigger picture here. Maybe the many who are furious should spend more time doing their homework on the project, rather than just uploading photos exclaiming their outrage on Instagram. The internationally renowned haven for urban artists will be providing two full apartment complexes and creating jobs for many. The Long Island City building is scheduled to be demolished before the end of the year for the luxury apartments.

The 5 Pointz artist collective aimed to block the building’s demolition by filing a request for a decree based on the Visual Artists Rights Act. The decree allows protection towards works of art that have ‘recognized stature’. It was Federal Judge, Federic Block who rejected their ruling, allowing for the demolition to occur. Panels will be placed on the outside of the two new residential towers to allow for aerosol art, Wolkoff said.

“I didn’t want any confrontation,” the elder Wolkoff said of the overnight overhaul that occurred between 3 a.m. and 8 a.m. “It’s torturous.”

Let’s hope this will not be the last we see of an aerosol manifestation in the city of New York.