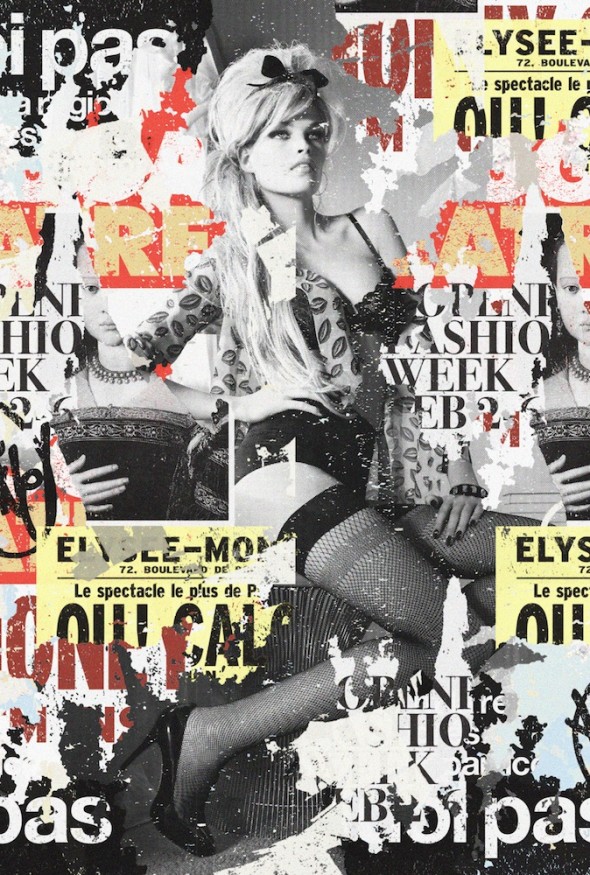 White Walls will be presenting Head Over Heels, the latest solo show by MN-based artist Greg Gossel, featuring 12 new large scale works on canvas. The opening reception will be held at White Walls on June 8, 2013 from 7-11pm. The exhibition will be on view through June 29, 2013 and is free and open to the public.

In Head Over Heels each piece is built up with collage and then layered with hundreds of hand-pulled screen prints directly onto the canvas: a new direction from Gossel’s previous approach to actually tearing posters and billboards off the street as he has done in the past. For the first time, Gossel has worked directly with a pair of photographers to acquire a variety of fashion-based images that are incorporated throughout the work. The images have been blown-up and hand screen printed in fragmented and weathered black and white to mimic life-sized billboards found on the street. By translating type and textures into a huge series of silkscreen prints which are then layered and repeated throughout the body of work, Gossel has created more dynamic and vibrant work than ever before.

Though the work is created with a very different process, it certainly references the decollage works of artists such as Raymond Hains, Jacques Villegle, and Mimmo Rotella. Glossy covergirl beauty is set against roughly multitextured surfaces in surprisingly harmonious compositions, making it clear that the artist’s signature exploration of urban decay and the constant onslaught of visual stimuli present in the mass media has become more finely refined with each show.