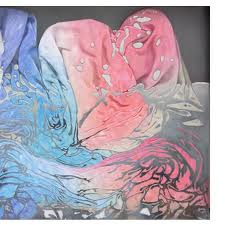 Brand New Gallery is delighted to present the group exhibition Changing states of matter, a show that sets out to reveal the processes behind artistic creation, processes that involve a ‘hypothetical production’ of the real, taken to the extreme limit of sensory experience. Through fragmentation of the initial work, this group of artists probes matter in ways that bring it to light in new forms and guises, giving rise to mysterious worlds obtained by the subversion of traditional artistic techniques. Each of the artists included in this group show has chosen a means of expression on the basis of his or her own experience of tangible matter and private memories. Thus matter becomes a metaphor for the structures of the society and the reality in which we live, and its aggression turns into a practice that can be used to explore the relationship with otherness and the mutual exchange that is constantly going on between people and objects.

Although some of the works presented in this exhibition may seem, in the accepted terms of the history of art, very traditional, the difference comes from subversion of the clichés inherited from and connected with the genre. They lay bare an evident tension between thought and the process of constitution, which makes it possible to conceive a new mode of sculpture that offers a kaleidoscopic vision of indeterminate spaces.

Some of the artists presented in this group exhibition express themselves by means of a traditional language, like Gabriel Hartley and Ivan Seal, who use a pictorial approach to create works of a material character in which unstable, mysterious and sensual forms are constructed and hollowed out, or like Aaron Angell, who harks back to ancient mediaeval rituals and manipulates the materials through laborious manual procedures, which allow him to play with matter and its lack of form, inducing an aesthetic disjunction that manifests itself by way of unexpected amalgamations and continual cultural cross-references. Mai Thu Perret’s mural ceramic is reminiscent of a biomorphic fossil and his sculptural work represents a point of contact between modernist form and applied art, while Kadar Brock invites the eye to roam eagerly among a series of stratifications that delineate abstract and experimental compositions, obtained through a ritual and contemplative process of scraping and smoothing the surface. Bianca Beck and Antonia Gurkovska take a more aggressive approach to the work and emphasize the ephemeral nature of their materials, resolved in their rough state and approached in a repetitive manner, in spasmodic search for an absence that would suggest the multiple and fractal nature of the work of art.

By contrast, the destructive action perpetrated by Matthew Chambers in his work permits a recontextualization of scraps of canvas salvaged from his old paintings for a new line of research stretching out vertically towards abstraction, like the one pursued in parallel by Molly Zuckerman-Hartung, who challenges the boundaries of traditional painting with sculptural collages that envisage the use of deceptive materials, located in a way that defies artistic conventions.

If Ry Rocklen tries his hand at the manipulation of the found object, elevating the most banal objects to the status of pure sculptural poetry, at once minimal and kitsch, Jessica Jackson Hutchins assembles ceramic artefacts and pieces  Analia Saban works the material with a surprising freedom that allows her to investigate and dismantle objects able to offer her the possibility of being reconsidered from scratch, through a scientific approach of extreme aestheticization of reality. Sam Falls also applies a scientific methodology, choosing the materials he uses on the basis of their capacity to document time, like the piece of fabric on show in the exhibition, which presents an image capable of bridging the gap between sculpture, photography and painting, obtained through a prolonged exposure to natural light, of which it displays the legacy through pure, sophisticated and abstract signs. We find an industrial aesthetic again in Ryan Foerster’s silkscreen on aluminium, which acts as a mirror reflecting the space (not without a touch of melancholy) and in the work of Nicolas Deshayes, who proposes a hybrid sculpture given over to a strange sense of hyper-materiality, achieved with materials that distort the ordinary and maintain a human presence mixed up with grafts that embrace the slick aesthetics of 21st-century design. Rona Pondick also takes on reality and the immediacy of an uncompromising materiality, conveyed through cold and shiny surfaces that trace hybrid and hyperrealistic shapes, exploring the theme of metamorphosis that so fascinates the artist, while the work of Steve Bishop takes the form of a sort of unstable para-painting obtained by the interaction of mercury with an old printed T-shirt: the quicksilver, caught in the folds and drapery, creates a random pattern of trickles and waves. Bishop holds a dialogue with the complexity of representation and his works play around with the cultural identity of objects, which are taken out of their context and turned into a work of art through their purely physical appearance. Equally physical is the encounter with the work of Folkert de Jong, who employs materials like expanded polystyrene and polyurethane for his sculptures industrial, selected for their intrinsic and contradictory properties of cheapness and indestructibility. The same materials are utilized by Lynda Benglis to create the non-objective sculptural forms that characterize her production of recent years: constructed by aggregation, they are at once evanescent and forcefully physical, deliberately indecipherable.