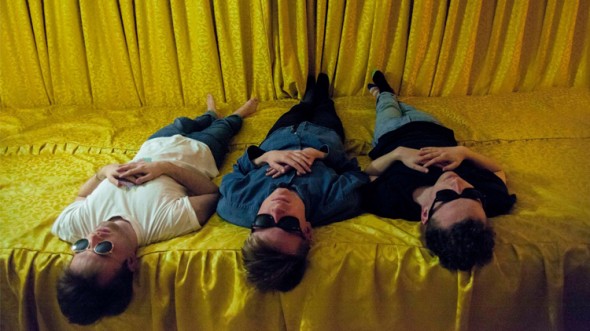 The first problem with CMJ is that there are too many bands you want to see. The second problem is: there are even more you don’t know you want to see. Unless you’ve heard every musical act in the lineup, you literally have a photo and a name to draft your schedule from. Of course you listen to the bands, but before you do that, you’re stuck with a visual based judgment; no one has the time to actually listen to the 1,000 plus artists playing the festival.

I nearly overlooked Happyness, the South-London trio who made their U.S. debut at CMJ last week. I’ll never be sure what made me click on their profile, but I’m endlessly thankful for the cosmic force that led me to do so. Made up of bassist Jonny Allan, guitarist Benji Compston and drummer Ash Cooper, Happyness play fuzzy indie rock that indulges in no ostentatious details. Compston and Allan share singing duty, both delivering the breathy, slack vocals of white-bread suburban alt-rock. The group just released their inaugural LP Weird Little Birthday in June, making them as new as they are young. The record is simultaneously simple and sophisticated, bringing to mind the pop genius of early Blur.

Notes from Pavement, young Weezer, and Sparklehorse can also be heard in the bones of Happyness’s songs, but not in a plagiaristic way. Their sound is bizarrely familiar, taking the sonic shape of something you’ve loved since middle school but can’t quite name. It’s the audible equivalent of a simple meal from childhood: you don’t crave it everyday, but when you smell it roasting in your mom’s kitchen the comfort is instantaneous.

I suspect Happyness won’t be obscured from the mainstream for much longer. Lauded by the likes of NME, Stereogum and NPR, the lads have had a decent kickoff to their first year in the business. They even got a blurb in The New York Times’ coverage of CMJ, which claimed that their songs “ have a promisingly wily undertone.”

Perhaps it’s the current cultural renaissance of 90s simplicity, but the group seems implicitly contemporary despite their 20-year-old references. Their set up is remarkably minimal given the textural depth of their music. It’s difficult to imagine a mere trio when listening to their record with its well-positioned riffs and layers of sound that somehow culminate in deceptively simple pop songs. Their straightforward approach to songwriting is never a bore, and they inject their tracks with off-kilter lyrics that could only be born of Millennial British minds. Track titles such as “Regan’s Lost Weekend (Porno Queen)” and “Refrigerate Her” communicate the group’s wonderfully dry, if at times dark sense of humor that goes far beyond a college boy’s love affair with beer.

“We wanted it to be like a wry smile, not angsty or too self-indulgent” says Allan in an interview with Stereogum. Somehow they’ve managed that balance perfectly, pairing hung-over melodies with flippant lyrics. “Great Minds Think Alike, All Brains Taste The Same” is a favorite with lines professing: “I like you but I wouldn’t eat you” atop irresistibly melodic guitar hooks and cooing “ooh-oohs.”

Their witticisms are not solely reserved for the recording studio. The show they played at Piano’s last Wednesday was rife with clever asides and quick retorts.

“This is our third show in New York…as musicians. Probably as people too” Jonny Allan quipped before sipping his PBR, an act I question the legality of considering he looks about 14. The sparseness of their sound was mirrored in their appearance, each member sporting a t-shirt, sneakers, and jeans of no particular wash or fit. The set was incredibly tight and exemplified Happyness’s musical dexterity. Compston didn’t shy away from squealing guitar solos, nor did the band sacrifice an ounce of fun for austerity’s sake.

Near the end of the gig they introduced the charmingly sadistic “Montreal Rock Band Somewhere”-a tune about scalping Win Butler of Arcade Fire and wearing his hair. It might be easy to dismiss Happyness if all they had to offer was snarky sing-along material, but the force of their humor is met threefold with their ability to craft catchy, relevant and gorgeous arrangements that deserve some serious attention.

Well, according to these boys nothing too serious.

Article by Madison Bloom for The Untitled Magazine