Today marks four years since the death of Lee Alexander McQueen, a designer who brought an aesthetic to the fashion industry that changed everything. From his sharp, tailored fits, intricate embellishments and gothic kilts, to a sense of dark enchantment in every garment, McQueen left a legacy that will live on forever. The Untitled Magazine would like to honor the late designer by taking a look back at some of his impeccable work.

“No. 13” is one of McQueen’s most famous shows to date. It was during this show that his eccentric designs began to flow, and it was also during this show that amputee model Aimee Mullins walked down the runway in a pair of wooden carved boots so impeccably made that the audience perceived them as simply a pair of boots rather than acting legs for the model. 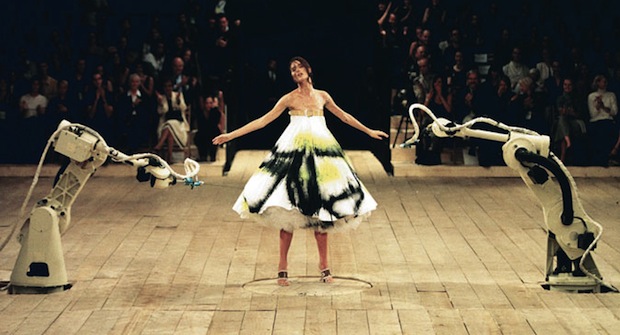 As for the most iconic moment of the show: the finale. It was then that model Shalom Harlow walked onto the runway in a plain white dress and stood on a rotating circle while two robotic arms sprayed her dress green and black. It has gone down in history as the only show during which McQueen cried.

During his Spring/Summer 2001 show entitled “Voss”, attendees stood in a room containing a large mirrored box and waited for hours staring at their own reflections. McQueen explained, “The idea was to turn people’s faces on themselves. I wanted to turn it around and make them think, am I actually as good as what I’m looking at?” Once the box was lit from within, models began to walk, unable to see out, while patrons looked in. The collection contained several varieties and themes – from cocktail dresses to pieces that included a top made out of jigsaw puzzle pieces. One of the most iconic pieces from the collection was a red dress made of microscope slides and ostrich feathers.

In what was arguably the designer’s most traditional runway show – free of theatrics – we saw a more romantic, feminine side of Lee. The collection consisted of mini-dresses, short suits with sheer fabrics, embellished belts and Grecian-style dresses. The line gave McQueen a different edge than he had before, showing that he could produce ready-to-wear collections with ease.

During the Spring/Summer 2007 show, McQueen gave melancholy an entirely new meaning. Flowers trapped beneath chiffon and lace, skirts constructed from tiers of petals and botanical prints, even a dress entirely made out of frozen flowers were accompanied by fluid tailoring. McQueen spoke about the collection: “Things rot. It was all about decay. I used flowers because they die.”

“The Horn of Plenty,” shown in Autumn/Winter 2009, was a subtle slap in the face to the fashion industry. The runway was made up of broken mirrors that surrounded a garbage heap of props from McQueen’s past collections – the stage was made to symbolize the crash of luxury within the industry. The collection was a parody of classic pieces – the little black dress, the houndstooth suit – all topped with caps made by milliner Philip Treacy. Speaking to press before the show, Lee stated, ““This whole situation is such a cliché. The turnover of fashion is just so quick and so throwaway, and I think that is a big part of the problem. There is no longevity.”

Plato’s Atlantis, McQueen’s last Spring/Summer show before his death, was famously worn by Lady GaGa in her “Bad Romance” music video. The collection stunned everyone – editors, fans, critics – no one could get enough of the line. McQueenadillos, 10-inch hoof-like heels, were donned by models wearing intricate prints and prosthetics above their eyes and cheeks. The show felt like a mystical, underwater experience that still has people talking.

Lee’s last collection, which debuted in Paris a month after the designer’s death, consisted of 16 outfits that were 80% finished at the time of his passing. Inspired by medieval times, the collection was made up of the brand’s signature fitted silhouettes, edgy prints and awe-inspiring footwear. Despite the demons that the designer was battling while creating the line, every piece shown was immaculately put together in true McQueen fashion.

In May 2011, The Costume Gala put together an exhibition displaying the designer’s work dating back to the early 1990s. Savage Beauty brought thousands of people to the museum a day, making it the most successful fashion exhibit at the Met to date. Quotes about the garments were displayed on walls throughout the exhibit; one quote stuck out amongst the rest: “I want to empower women. I want people to be afraid of the women I dress.” 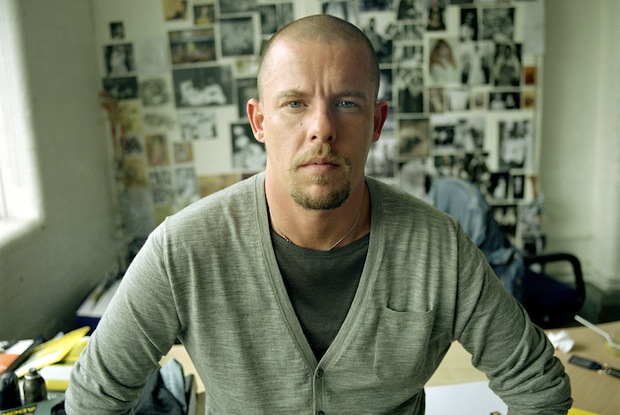 Lee Alexander McQueen is remembered as a visionary, a man who brought an entirely new outlook to the fashion world, and a romantic soul. The designer made a mark that will never be changed and, four years past his untimely death, he is still greatly missed.