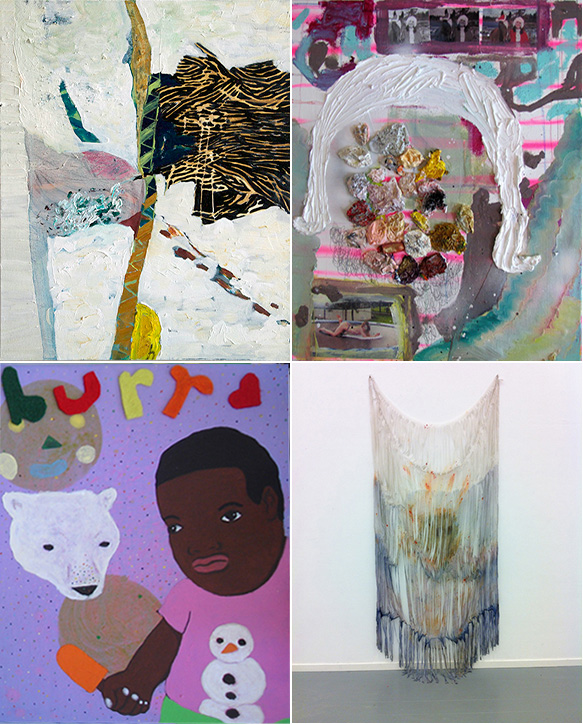 Named after the suggestive blues standard first recorded by Muddy Waters in 1954, (I’m Your) Hoochie Coochie Man brings together the work of David Leggett, Trew Schriefer, Tim Nickodemus, and Rachel Niffenegger. All of the artists have graduated within the last six years and – like Waters – hail from the Chicago area. While geographically and generationally aligned, each artist brings a distinct approach and body of work to the show.

The influence of Chicago is most evident in work by David Leggett, who reflects the city’s popular culture while registering the influence of the Chicago Imagists, a group of artists in the sixties who rejected the prevailing New York trends for surreal, almost grotesque representational work. Leggett inscribes himself into this arm of art history through his uncanny scenes, cartoonish figures, and vivid colors-like those of Jim Nutt and Karl Wirsum. The levity and child-like naivety connoted by Leggett’s use of craft materials and a comic book style is immediately belied by his subject matter, which is simultaneously humorous, perverse, devastating, thoughtful, and personal. Issues of class, race, sex, and violence are tempered by Leggett’s dark sense of humor, which works to effect poignant satire and social commentary.

The use of non-traditional materials is also evident in work by Trew Schriefer. Photos sourced from popular culture-such as images of horses or posing girls-glitter, and craft appliqués populate Schriefer’s canvases among heavy layers of oil paint, spray paint, and scraps of used canvas. By collaging ripped up old paintings, scraping off materials and reattaching them in new relationships, Schriefer employs a studio bricolage technique to bring an active quality to his work. The resultant quasi-melting pot undermines the hierarchy of materials and recalls Rauschenberg’s concept of the flat bed picture plane-this time defined by a quality of celebrated, uncouth excess. The canvases take on a sculptural quality that champions the mark of the artist, confronting the viewer both visually in the use of brash colors and spatially through an aggressive materiality.

The work of Tim Nickodemus hinges on this notion of a structural and spatial contingency. His abstract paintings respond to extending a very physical body into a physical world. Lanky forms jut into knobbed shapes, sharp edges disrupt the integrity of planes, and surfaces are mottled, grooved, and overlapping. These ‘limbular’ paintings place space on equal footing with the body, giving viscera and senses to environs. Exploring and in search of graceful collisions, Nickodemus uses these works as a topography to travel through basic physical relationships, parts placed side by side, limb with limb, and body with body.

The residual impression of the body is of paramount import in the work of Rachel Niffenegger. Through a labor-intensive process, which the artist considers a personal exorcism ritual, Niffenegger explores the notion of a being or a presence. Multilayered images arise in her dyed fabric pieces, which function as shrouds and relics as much as paintings and clothing, while her objects serve as petrified forms that refer to the body’s past aura and myth. Her most recent steel, clay, and cloth forms are a drawn reflection upon the modernist tropes of opacity and transparency, as well as volume and void. This is made present most palpably in the artist’s exploration of sculpture’s relationship to drawing and the use of absence to create space. Texturally, the work is both bone-like and crazed; weathered, used, touched and destroyed. The works are pale and drained of most color, such that all that remains are residual pigments, powders, and a sense of entrancement.

Aptly opening on Valentine’s Day, (I’m Your) Hoochie Coochie Man presents a glimpse into the practice of four emerging, Chicago-based artists – all of whom will be present at the opening. Loosely connected through an interest in materials and materiality, they raise questions about space, place, popular culture, and the body.

0
The Untitled Magazine February 14, 2013
No Comments Yet