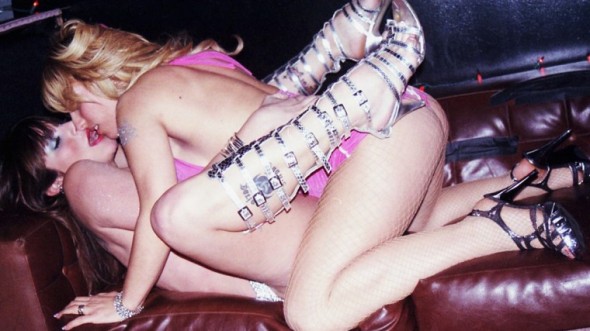 New York City can be a lonely place. It’s easy to feel like you’re completely alone in a crowded subway filled with stone faces, the ones that are supposed to be your friends and neighbors. Just a day in the neighborhood, I guess. But who could blame someone for getting into a groove, a comfortable rhythm, and not wanting anyone to mess it up? Like the waves of the ocean, New Yorkers have a certain strength that keeps them going through the daily motions, which is what makes the city thrive and prosper. When everyone is perfectly content in their own lives, it’s difficult to find a way to reach out and connect with someone else…unless you want to get a little kinky. And by a little, I mean getting spanked and pleasured in as many ways as the human body allows.

When I started doing research for this article, I had no idea what to expect. All I knew about the New York City underground sex scene was everything I’d seen on Gossip Girl, or everything I’d read about Fifty Shades of Grey that made me refuse to read it. So, like any good red-blooded American that grew up with the Internet, I dove into Google with everything I had. The list of places and events that came up ranged from BDSM, to swinger’s parties, to glorified burlesque shows. Most of them are only open on the weekends, with some having cheaper Monday and Wednesday night events. Of all the things I saw and read, I decided on attending a swinger’s party hosted by Caligula, which promised debauchery, eroticism, and a free buffet (after the cover charge, of course). Along with the reasonably priced cover charge (’cause these things can get top dollar pricey), I made a reservation and received the secret location in Astoria for Friday night.

The club didn’t open till 10pm, so after ordering some falafel and watching a couple of episodes of New Girl, I made the trek from the west side of Manhattan to the location in Astoria. While the black cat crossing the street didn’t do anything to calm my nerves on the way over, I took a deep breath and continued on my way in my heeled boots and just-above-the-knee black dress. The walk was quiet, not a threatening quiet, but the quiet that gives you too much space to question the decision you’ve made. By the time I got to the address, I’d come too far to run back home and have a date night with my life partner, Netflix. I walked up to the door, walked in, and held my breath.

After the doorman gave me a rundown of the layout of the place, I walked in, ready for an experience. The place looked like it used to be an Italian restaurant. Being Astoria, it most likely used to be a Greek restaurant. But the place looked clean enough, and the four people that were at the bar seemed to be enjoying themselves, and so did the one stripper dancing by the DJ booth. I settled into a seat at the bar between two couples, and nursed the first beer from my six pack. For those who’ve never been to any of these clubs, it’s a BYOB policy, but usually customers are willing to share. Two of those customers I struck up a conversation with, and they offered me a shot of vodka. They were Dennis and Tracey*, a couple who had been dating long enough to want to try something new. They’d found the place, as most of the people there had, through research on the Internet, save for the one brave soul who walked in with her boyfriend simply to use the bathroom. 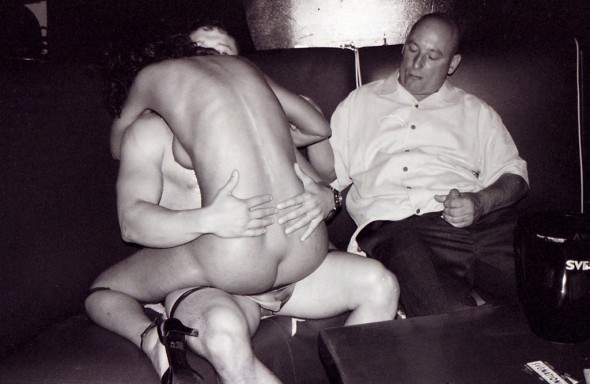 “I mean, don’t get me wrong, I’m not going to be screwing anyone else here tonight, but I want to be open for him. I love him, and that’s what being together is about, you know?” she said, leaning against Dennis for support. He promptly raised his free arm with his palm out. “Hi five for love.” He said, and they brought it in. They were very charming, like most of the people there. Mostly, the couples there were in the same situation as Dennis and Tracey, with the occasional single guy who’s looking for casual sex, and does nothing to hide it. Seeing my new friends as my liaisons into this world, or at least tonight’s world, I let them in on the play, and they happily obliged to let me shadow them the rest of the night, and to go off and “do my thing” when needed. After meeting another couple, a husband and wife who’d been together for 15 years, we decided to go explore the upstairs area as a group.

The upstairs looks like any massage parlor, if massage parlors had porn playing on the walls and a bowl of condoms on the bedside table. The place was dark- lit enough so that you could see someone and most of their face, but dark enough to give a false sense of privacy. There were single rooms with queen size beds, and couples room where folks could get it on in one, big, happy cluster. There were three beds pushed together to make a long L, where couples (all male and female pairs) achieved every position and type of copulation one could fathom. As I sat on the couch, chatting with two other voyeurs as we took everything in, I couldn’t help but feel an unusual amount of ease- I was more than comfortable in a situation that I thought I would run in the other direction from. For someone who almost never wants to be wrong, I was happy to be wrong this night.

That’s not to say that the night didn’t come with a set back or two. At one point, I tripped over a woman’s lone stiletto on the floor when stepping outside to make a phone call. I also had a guy, one of the only two single guys to attend the party, that either lost some hearing from the loud music playing downstairs, or didn’t understand the concept of rejection. After multiple times of asking me if I was “ready to go with him,” I finally gave the truth of my journalistic intentions for being there, along with the boyfriend who I care very much about and didn’t want to cheat on. After a silent lull of about two minutes, his response couldn’t have been made up. “Oh, okay…So, do you want to jerk me off really quickly?” That’s when I raised my voice, which was apparently a little too much for Mr. Viagra across the room, in the process of getting his happy ending, who looked up and furrowed his brows at me. I was not interested, and that was final. On top of all that, the bartender let my beer get warm.

On the cab ride home, which I split with a tipsy, bickering couple who I’d just seen writhing together on a mattress a few moments before, I couldn’t help but feel that I was still there, watching the debauchery in the same way that some people watch a Werner Herzog film. Spending so much time by ourselves, in our comfortable daily routine, we tend to shrink into ourselves, never really feeling touched by the world going on around us. We confuse the loneliness for the reality of daily life. It took a giant orgy to bring me out from the place I decided to keep myself, the part of me that felt and reacted to things. Life, especially as a creative person, is about experiencing the world around you, learning things you never thought you’d come to know. This night was one of those things.

KADY Z ON POP MUSIC, BREAK-UPS, AND THE WORDS SHE LIVES BY - EXCLUSIVE INTERVIEW