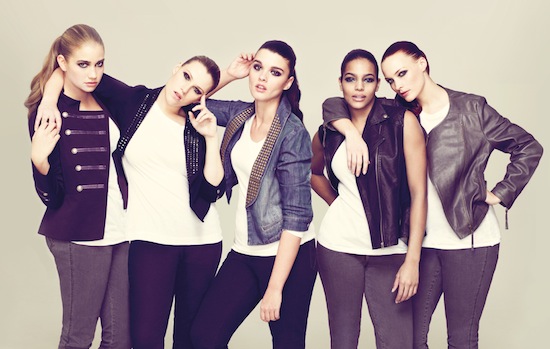 Sizing in the modeling industry has been fluctuating for decades. Currently sample sizes are 0 and 2, making it impossible for a healthy woman to fit into clothing without succumbing to starvation. It has been documented that nearly 40% of models currently working in the industry are struggling with an eating disorder and our question is why?

A young model recently penned an essay about her struggles – she couldn’t find a job as a 5’11” model at 120 pounds because she was a size six, eventually being told by agencies that she should pursue plus-sized modeling instead. (It should be noted that Kate Upton, who has graced the cover of Vogue, happily admits to being a size 6 and Cindy Crawford, who was THE supermodel of her time, was also a size 6.)  The subject is very tongue-in-cheek within the industry as stylists and photographers openly prefer to work with pin-thin models over healthy girls. The average size for an American woman is a 12, while models average a 0 or 2, so how is it that a 6 is considered plus-sized? The fashion industry is, more or less, promoting an unhealthy image to women across the world.

The horror stories of models eating tissues and sticking to a diet of cigarettes and Diet Coke are the farthest thing from glamorous, yet so many young women are drawn to the glamor of the industry. Back in the 90s, stories began to come out about models doing cocaine in order to stay awake during runway shows because their diet was so minimal, leading to drug addictions. It was around that time that Kate Moss entered the scene, becoming widely referred to as “Cocaine Kate.” Moss brought on a whole new breed of skinny in the industry that pushed the muscular build of models in the 80s out of the picture. In a 2009 interview, Moss is quoted saying “Nothing tastes as good as skinny feels.”

If nothing tastes as good as skinny feels then why does the image of a model walking down the runway nowadays put such a bad taste in our mouth? Women and girls who work in the industry are subjected to massive amounts of criticism – whether it be that they need to alter their facial features, lose weight, or change their hair, each time a model is told that she needs to change in order to work, she is being told that being herself just isn’t good enough. 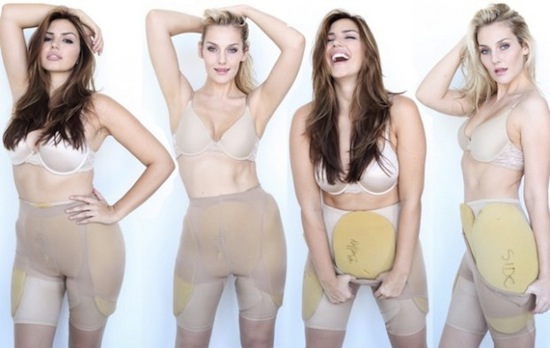 Even the plus-sized women that we see in ads aren’t as plus-sized as they would appear. In the above photo, you see models wearing padding – a “trick” that is used in the industry to add weight onto plus-sized models in order for them to appear heavier without actually having to gain any weight. Although it may not be as large of an epidemic as models starving themselves, it’s still selling an unrealistic image to women across the world. And it’s not just the models themselves causing hypocrisy – we recently posted an article debating the use of photoshop in the fashion industry, outlining the psychological effects that unattainable images give to the public. Young girls shouldn’t have to grow up in a world where sickly-looking women are the idea of perfection and, more importantly, they shouldn’t have to feel like they need to starve themselves in order to achieve that image.

A size 6 is healthy, just as is a size 12. As long as women are treating their bodies correctly, it shouldn’t matter what the fashion industry has to say. Sample sizes are specifically designed for women who are “supposed” to fit into them and many models admit that even they can’t fit into sample clothing. Simply put, women shouldn’t let the media and fashion industry alter their perception of beauty.