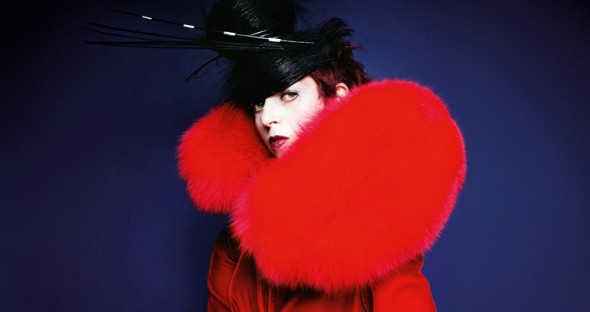 From rows of Manolo Blahniks to Alexander McQueen‘s graduate collection, the latest exhibition at London’s Somerset House celebrates the life and wardrobe of the late du jour maven, Isabella Blow. Opened in London this Wednesday, Fashion Galore celebrates the life and style of Blow, who was well-known for discovering British designers Alexander McQueen and Philip Treacy. Friend to Andy Warhol and Jean-Michel Basquiat, Blow was one of Britain’s boldest fashion enthusiasts; the magazine editor for Tatler and the Sunday Times Style fashioned a pseudo trademark with her dramatic headgear and theatrical attire, donning everything from impressive headpieces to choosing a purple medieval robe as a wedding dress. The exhibition pays homage to the British fashion icon with dedications and memoirs from her devoted confidantes, curated by Alistair O’Neil and Shonagh Marshall.

Blow was a tortured soul beneath her fashion mogul facade, suffering from a difficult case of depression. Her condition led to her taking her own life in 2007 but she remains one of the world’s most influential fashion editors. Blow began her magnificent thirty-year career in the early ’80s as Vogue Editor-in-Chief, Anna Wintour’s assistant. She has been credited as influencing numerous artists and designers; taking Treacy under her wing during his early millinery student years, she also discovered models Stella Tennant and Sophie Dahl. The Somerset House exhibition showcases over a hundred pieces from her brilliantly rich collection. Daphne Guinness, who saved her friend’s towering amount of clothes before they were disbanded into auctions, shortly after her passing, owns one of the most breathtaking parts of the collection privately. (Alexander McQueen’s graduate collection, the colossal heap of Treacy’s headgear, and rows of Manolo Blahnik shoes are all among the private collection.)

Of her close friend’s tribute show, Daphne Guinness stated: “This exhibition is, to me, a bittersweet event. Isabella Blow made our world more vivid, trailing colour with every pace she took. It is a sorrier place for her absence. When I visited her beloved clothes in a storage room in South Kensington, it seemed quite clear the collection would be of immense value to a great many people. I do believe that in choosing to exhibit them we’ve done the right thing – and that it is what she would have wanted. I am doing this in memory of a dear friend, in the hope that her legacy may continue to aid and inspire generations of designers to come”.

Nick Knight will be commissioning the photography of the Isabella Blow collection. The exhibition traces back into Blow’s early life and her aristocratic background, in which Alistair O’Neil credits to her appeal and success. “She traded on her family history and her Britishness,” he said. “She was this attractive, artistic figure. She had no money, but lots of stories and lots of style.”

A fashion inspiration to many, Isabella Blow was a spearheading believer in design and aptitude. Visitors will be able to explore her archive of articles and discover her enduring legacy. This bittersweet exhibit will run at Somerset House until March 2nd.

Below is a film dedicated to Isabella Blow – a stunning mini flick by Ruth Hogben – bringing life to the wardrobe of the late fashion icon. The film was shot at Blow’s erstwhile home in Doddington Hall and runs as a projection within the exhibition.